There were times during the early years of Earle Avery’s career that folks in the Maritimes weren’t sure whether the horseman from Knowlesville, N.B., was more interested in harness horses or his 600-acre potato farm in Woodstock, N.B. While his career certainly didn’t follow the standard route of most horse-men, the unusual path proved good enough to one day earn him induction into both the Canadian and U.S. Halls of Fame. As it turned out, harness racing was always his first passion and when he retired from farming, he pursued his dream full time, especially when it came to a horse that would become one of the foundation sires of today’s pacing ranks – Meadow Skipper. Some of his sons include Albatross and Most Happy Fella. He’s the grandsire of Niatross, Fan Hanover and Cam Fella.

Son of a prosperous farmer and lumberman from New Brunswick, Avery started driving in match races over the main streets of Knowlesville before there was a track in the area. His first racetrack win was in 1919, behind the trotter Black Peter. For the next 33 years he successfully combined a professional driving career with large-scale potato farming.

In 1955 he left the ranks of the public stable operators and joined Norman Woolworth’s Clearview Farm as head trainer and driver. The combination was very successful with such outstanding performers as Egyptian Princess, Porterhouse, who won the American Trotting Classic, Muncy Hanover, Sh Boom, Bright Knight, Winnow and, of course, Meadow Skipper, who would go on to become one of the sport’s greatest sires and would also give Avery, at age 69, the fastest ride of his long career, a 1:55.1 mile at Lexington, Ky. Meadow Skipper also gave Avery his fastest win, 1:57.4, as well as victories in the Cane Pace and the American Pacing Classic. Although he rarely drove as many as 300 races a year, he managed to win 1,252 races and earn almost $3.5 million in purses. In an era where a 2:00 mile was special, Avery scored 21 times in 2:00 or less.

World records, 2:00 miles, and $100,000 purses were part of the Woolworth-Avery combine. Earle received the initial U.S. Harness Writer’s Clem McCarthy “Good Guy” award in 1963, and exemplifying that award he later, at his own expense, took part in celebrations in the Maritime Provinces, and at Rochester, N.H. In addition to being a respected horseman, Avery was also a major influence in the success of the racetrack in Woodstock, N.B., where he lived for most of his life. Woodstock Driving Park holds a race in his honor every year during the community’s Old Home Week celebrations. Earle Avery once wrote a cheque to pay off the town’s entire debt. 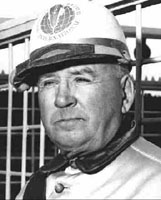