It was only fitting that Conn Smythe, the man who built Maple Leaf Gardens and a hockey dynasty that won seven Stanley Cups and inspired a spirited group of fighting men in two World Wars, would become one of the leading owners and breeders of thoroughbreds in Canada. Smythe’s formula was simple: “Breed the best, raise them properly, have the best help possible and let the horses tell you when they are ready to run.” Smythe, primarily, bred his own stallions to his select band of mares – about 15 at any time – and the results were phenomenal. His horses won 131 stakes races (41 in partnership with Larkin Maloney), and two Queen’s Plates. 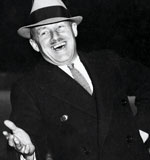 Born in Toronto in 1895, Smythe was a military man who served in World Wars One and Two with distinction, a successful businessman, and a philanthropist. He generated headlines and controversy for more than 50 years with his unvarnished opinions and fierce independence. Few who knew him will ever forget him – the fiery temper and blazing blue eyes, the zest for life, the combative spirit that never backed away from a fight. When he died at age 85, he had become a legend – a master entrepreneur whose achievements left a permanent mark on Canada. He built Maple Leaf Gardens in a smashing reversal of financial retrenchment policies of the Great Depression, and challenged E.P. Taylor for most stakes wins when their stables competed against each other in the 1950s, 1960s and 1970s. 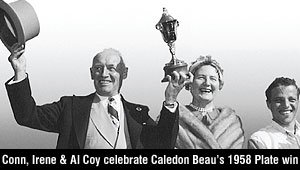 For 50 years thoroughbreds carrying the proud blue and white silks emblazoned with a maple leaf of Smythe had been an integral part of Canadian racing. Caledon Beau in 1958 and the courageous filly Jammed Lovely in 1967 captured Canada’s premier event, the Queen’s Plate. The myriad of top horses raced by Smythe include Sir Marlboro, winner of the Canadian International, Not Too Shy, Lovely Sunrise, Twice Lucky, Jammed Lucky, Bye Bye Paris, Connie Pat, Lucky North Man, Northern Minx and Bye And Near. His best horses in partnership with Maloney were Wonder Where, Ace Marine, Kitty Girl and Jet Marine.

“The Major” entered racing as an owner in 1929. His first stakes winner also provided him with one of his largest betting coups when his maiden filly, Rare Jewel, won the Coronation Stakes in 1930 at odds of 106-to-1. Smythe made $14,000 on the race and used most of it to buy King Clancy from the Ottawa Senators. Clancy became an all-star with the Leafs and later team coach, longtime employee and close friend of Smythe.