Clint Hodgins, born in 1907 in Clande-boye, Ont., was an outstanding driver who believed in letting the record speak for itself – and it did, rather eloquently. Since the United States Trotting Association was established in 1939 through 1974, Hodgins won more than 1,750 races – and no one, including burly Clint, knows how many he had won in the U.S. and Canada prior to that date. A serious accident at Monticello in 1965 cut his racing activity drastically, but in 1967 he rebounded with a fine year and potent stable.

He set a string of world record setting in 1940 with the two-year-old trotting filly Acrasia, but gained his greatest fame in the post-war years as driver of Proximity, the great trotting mare who rewrote the record book in 1948-1950. In 1959 he had Adios Butler and Bye Bye Byrd, which he trained until that pacing stallion’s retirement. Elaine Rodney earned considerable fame under his guidance. Bye Bye Byrd was Horse of the Year in 1959. In 1949 he led all drivers in dashes won with 128 and in money won with $184,108. 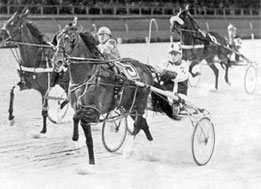 Clint winter-trained in Orlando, Fla., for decades and maintained a residence there. Horsemen called him poised and nerveless with an uncanny sense of timing which earned him nose and head victories on late rushes. Many thought he was tops as a “money” driver. There were many younger horsemen who credit Clint with boosting their careers and thought he was the greatest “teacher” that ever lived. In 1972 he bred, raised, trained and drove the outstanding three-year-old pacer Skipper Thorpe, winning eight stakes and giving him a 1:58.2 mark. He was inducted into the Hall of Fame of the Trotter at Goshen in 1973. Among his greatest wins were the Cane Pace with Cold Front in 1961 and Ranger Knight in 1962 and The Little Brown Jug and Messenger Pace with Adios Butler in 1959. After retiring from driving Clint spent summers following his homebred colts and fillies in the Ontario Sires Stakes. Hodgins died in 1979 at age 72. 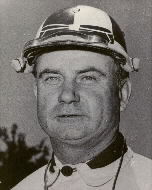