A successful printing company executive, Gerard Veilleux had long been an active and dominant figure in harness racing circles in Quebec. Veilleux became interested in the sport in 1945 when he purchased his first horse, a pacer named Parade Hanover, and raced him around the fairs near his native Drummondville. Parade Hanover wasn’t a record breaker but whetted Veilleux’s appetite for the sport. He kept buying and racing horses for many years, always on the lookout for an exceptional one and was finally rewarded with a trotter named Choir Boy.

Choir Boy developed into an outstanding trotting prospect in the early 1960s and became the first Quebec-owned horse ever to contest the prestigious Hambletonian classic in 1963. About the same time, the fortunes of Veilleux took another good turn when he purchased a young filly named Chief Maid from Pickwick Farm of Columbus, Ohio. Chief Maid was a top notch pacer and won more than $50,000 in her career. Chief Maid’s greatest contribution to the sport did not come on the racing strip but rather as a broodmare as she subsequently produced a filly named Woodlawn Drummond.

Woodlawn Drummond, with ace reinsman Keith Waples at the controls, earned more than $100,000 in her career and won the Lady Maude Stakes at Roosevelt Raceway in 1965. Woodlawn Drummond was an exceptionally game mare but unfortunately in many of her races she was up against a colt named Bret Hanover, who utterly dominated the sport during his career.

In the late 1970s the Veilleux breeding farm at St. Hughes took an active interest in harness racing and stood three stallions – Drummond Hanover, Drummond Bye Bye and Lloyd Drummond – along with some 20 broodmares. In 1976 a strapping two-year-old son of Drummond Bye Bye appeared on the Quebec racing scene and proved to be one of the most pleasant surprises of the year. Bill Drummond started in 16 races, won 13 of them and finished second on two occasions, finally ending his juvenile season with earnings of $41,494. In his last start of the year at Blue Bonnets, Bill Drummond finished second to Tomcat Hanover in a 1:59.4 mile. 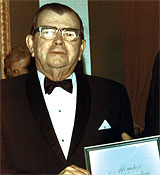