Each sport has developed a select group of legendary heroes – names which stand out over all others through outstanding performances that earned fame and glory – Babe Ruth, Ty Cobb, Gordie Howe, Jack Nicklaus and Jesse Owens. In harness racing, Benjamin Franklin (Ben) White is such a name. The story of his life is one of the memorable sagas in the annals of the Standardbred – where his place in history will forever be secure. Born in Whitevale, Ont., on February 5, 1873, the driver of Hambletonian champions died May 20, 1958. White drove his first race at age 15 at Markham, Ont., launching an incredible career that lasted 60 years. The 1946 season was his last active one in the sulky, but he drove an occasional race thereafter. In 1949 he made his last and 19th Hambletonian appearance. 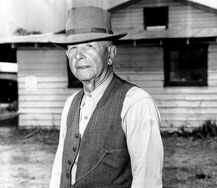 In 1893 he went to work as a groom at C.J. Hamlin’s Village Farm in East Aurora, N.Y., where he worked under one of the most celebrated trainers in racing – Edward (Pop) Geers, head trainer for Village Farm. He soon became Geers’ assistant. To say that Ben White made an indelible mark in the sport of harness racing would be true only in the proverbial sense of the statement, for he left many, many such marks which will live forever in the annals of the sport. He is famed as the driver of four Hambletonian and seven Kentucky Futurity winners; but this scarcely recognizes his accomplishments in colt stakes. His name has been linked with a few top pacers, but he is renowned as a developer and driver of trotting colts. He deservedly earned the appellation, “Dean of Colt Trainers”. One of the stars of the Ben White string was The Abbe, a world champion three-year-old trotter and sire of Abbedale, the founder of a most vigorous pacing family.

White won his first Hambletonian in 1933 with Mary Reynolds. His fastest trotter, the champion trotting mare Rosalind 1:56 3/4, was bred by White and won the Hambletonian in 1936. He won the major trotting event again in 1942 with The Ambassador and the following year with Volo Song. White was elected an Immortal to harness racing’s Hall of Fame at Goshen, N.Y., in 1958 and was further honored at his home in Orlando, Fla., when city fathers named its track – Ben White Raceway – which is referred to as the colt capital of harness racing.