How good was Bunty Lawless? In a poll conducted by Canadian Press in 1951, the voters selected “the little guy’s horse” as Canada’s Horse of the Half Century. He not only earned an ever-lasting reputation as a gifted racehorse, but his legacy as a sire left an indelible mark on the history of the Plate. His bloodlines would trace through a succession of King’s and Queen’s Plate winners for the next two decades. He was Canada’s leading sire four times. Two of his sons, Epic and McGill, won the King’s Plate, but the son who had a great influence on Canadian racing was the exceptional stakes champion Windfields, who sired Queen’s Plate winner Canadian Champ and Victoriana, the dam of Plate winner Victoria Park, who sired three Plate winners.

Winner of the King’s Plate in 1938 before an adoring throng at The Woodbine, the chunky, durable colt was owned by a feisty Irishman, Willie Morrissey – a boxing promoter, hotel owner and ex-newsboy from Toronto’s east-end. The colt was named after his friend, James (Bunty) Lawless, a big brother to youngsters in Toronto’s tough Cabbagetown district, and was sired by Ladder, an ill-fated stallion who died in a stable fire at Thorncliffe Park in Leaside.

Ladder, third in the 1931 Preakness Stakes, was brought to Canada in 1934 by Frank Selke. The mating of Ladder and Mintwina, a filly that Morrissey had claimed for $2,000 at Fort Erie, was one of those fortuitous occurrences. Morrissey claimed Mintwina to “get even” with her owner who’d refused to sell him the mare at a lower figure. In her first race for Morrissey she suffered a broken sesamoid bone at Hamilton racetrack and he was all for putting her down, but his veterinarian, Dr. R.K. (Doc) Hodgson, persuaded him to breed her to the newly imported U.S. stallion Ladder.

At two “Bunty” revealed his talent – winning three races and finishing second six times in 10 starts. His major tally that year was in the Clarendon Plate. That winter Jack Anderson, a former teamster, trained the colt as if he was one of the plodding animals he used to drive in the brickyards and lumber camps. He had him in training in early January at Dufferin Park, toiling over the frozen oval. In 1938, at age three, he was Canada’s leading money winner with five wins, four seconds and a third in 13 races. Besides his Plate victory he won the Long Branch Championship (later named the Canadian International) and the Hare Memorial Handicap. At age four he won the McIntyre and Louden Memorial Handicap and was second to King’s Plate winner Archworth in money earnings. At age six in 1941 he again captured the Long Branch Canadian Championship and ended his career with 19 victories, 15 seconds and three thirds in 47 starts.

Bunty Lawless stood at stud at Doc Hodgson’s farm in Todmorden, Ont., and later at Morrissey’s farm near Highway 27 and Burnhamthorpe Rd. He died at 21, just three days before the opening of “the new” Woodbine in nearby Rexdale in 1956. 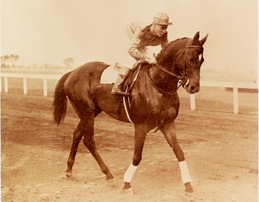