Duchess of York, who died while foaling in the early 1940s, was buried in the southeast corner of Victoria Park in Calgary. Her burial plot was next to another Hall of Famer, Joey, the only two thoroughbreds to be so honored at the Alberta track. She was deserving of such an honor if only because of her durability and honesty. She raced 221 times in her career, winning 38, and was considered to be the best mare to come out of Western Canada in her era.

She was owned and trained by a popular Japanese-Canadian and former restauranteur, Kemo Inamasu. Born in 1879, he left Japan as a teenager to seek his fortune. He first went to Europe, then to North America, where he was caught up in the gold rush and went to the Klondike in 1898. Perhaps the trip was a failure, but he compensated for it later when he claimed the 5-year-old mare Duchess of York for $1,000 in 1928. The mare was bred by Charlie Yeadle, who had purchased her dam, Lady Kilmarnock in foal to Yorkshire Lad. The foal was Duchess of York and she won seven races for Yeadle over three years before she was claimed by Inamasu.

In the hands of Inamasu’s Sunrise Stables, the mare won 31 more races at tracks in Toronto, New Orleans, California, Winnipeg, Calgary, Edmonton, Saskatoon and Regina. Never one to duck the tough ones, she defeated some of the better horses in Toronto, including Speycrest, when she won the William Mulock Cup. The gallant mare beat Yorkhome and Yorkie Prince in winning the 1928 Western Canada Handicap and the 1931 Whittier Park Handicap at age eight. In addition to her 38 career wins, she had 38 seconds and 40 thirds. She won at distances from five furlongs to one and one quarter miles, a tough mare who did everything asked of her. 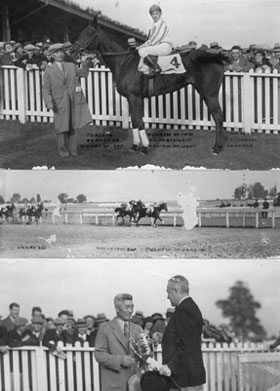