In 1966 George Royal gave jockey John Longden a moment he cherished along with his Triple Crown victory on Count Fleet in 1943. The race was the San Juan Capistrano – a mile and three quarters on the turf at Santa Anita – and George Royal, as usual, was well back in the early going. But he moved up and now, with an eighth of a mile to go, he was locked in a nose-to-nose struggle with Plaque. At the wire George Royal’s nose was thrust ahead of his opponent’s. When the result was posted, the crowd of 60,000 erupted into a noisy demonstration.

It was Longden’s last race.

If George Royal did anything wrong in his career, it was being born the same year (1961) as Northern Dancer. As a result, George Royal had to wait until he was a 4-year-old to gain recognition outside British Columbia. At the time of his retirement he was the second leading Canadian-bred money-winner, behind Northern Dancer.

George Royal, a son of Dark Hawk from the dam Polly Bashaw, was bred by Wilson Dunn of Vancouver, who named the colt Royal George with the idea of selling him to George and Max Cristall, owners of the Royal George Hotel in Edmonton. He offered the colt and his full sister to the brothers for $3,000. They declined. So he sold the colt to Vancouver furniture dealer Ernie Hammond and horseman Bob Hall for $1,500.

In 1963 at age two he won four of eight starts but was considered second best of this age group in B.C., behind Frannie, the Futurity winner. At three George Royal won nine consecutive races at Exhibition Park. In March of 1965 Longden rode the 4-year-old to victory in the $125,000 San Juan Capistrano. That winter he’d raced against Gun Bow, Candy Spots and Hill Rise. After taking the summer off he went to Toronto to prepare for the Canadian International Championship at Woodbine. He lost two allowance races, but trainer Don Richardson, who had ridden George Royal early in the horse’s career, had him ready for the Championship. With Longden up he defeated Brave Lad by half a length over a mile and five eighths of soft turf.

George Royal was then invited to race in the Washington, D.C. International at Laurel, Md., and was made second favorite at 7-to-2. Ridden by Bill Shoemaker (Longden had received a suspension in California), George Royal was beaten by less than two lengths in a four-horse blanket finish to two French horses and Roman Brother. George Royal was chosen Canadian Horse of the Year in 1965.

In 1966 he again won the San Juan Capistrano (in Longden’s farewell) and the Canadian International Championship with Ismael Valenzulea up. His last race was the Washington, D.C. International. George Royal had a bothersome ankle and when he tried to make his familiar stretch charge he could not lengthen stride and finished eighth in a field of 10. He was retired to stud at Emerald Acres, Aldergrove, B.C., where he sired stakes winners Connie Pat, Royal Morn and George of Canada. 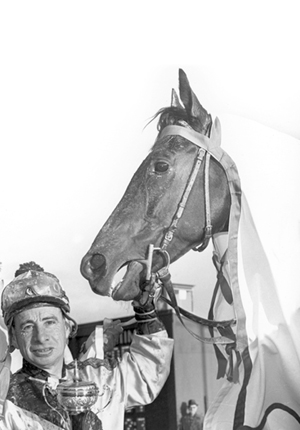