A $2 dollar bet on Horometer, the horse critics believed might become the greatest King’s Plate winner of them all, was a chance to earn a sure dime, which was not easy during the Depression, a time of rampant unemployment and breadlines. It was 1934 and a crowd of 23,000 was at Woodbine Park. The only reason for the largest crowd in years was to view the undefeated brown gelding of R.S. (Sam) McLaughlin’s Parkwood Stable. “Every mother’s son had made up his mind that Horometer was the only possible winner and everyone wanted to be on hand to see his judgment vindicated. When the big horse came from behind and took a commanding lead coming into the stretch, thousands of heads were literally nodding their ‘I told you so’s’,” wrote The Mail and Empire.

From the day Horometer went to the post for the first time as a 2-year-old, his reputation of superiority would gain in momentum. Following his win in the Goodwood Plate it was suggested that it would take a horse that “was above the ordinary to take the measure of the Oshawa-owned youngster.” None did as he also won the Clarendon, Coronation Futurity and the Grey Stakes Handicap. He was 5-for-5. The following spring his workouts were enough to scare off most owners and it was predicted that he would set a Plate record, which he did by a full second. It was a race that some felt should have been either a “non-betting affair” or a “walkover.” Four days later he captured the Breeders’ Stakes. But three races in the space of eight days would be too taxing, for on May 26, a week after his Plate triumph, he lost the Hendrie Memorial by inches to an older horse carrying six pounds less. It would be the only blot on Horometer’s record of eight wins and a second in nine starts.

On June 9 at Long Branch he made his final start, winning the Canadian Breeders’ Handicap over Shady Well. For a brief period it was Horometer’s year. However, his meteoric ascent would crumple before greatness could be tested against top horses in the United States as he came out of the race with a broken bone in his foot. The following spring his legendary jockey, Frankie Mann, said that Horometer pulled up lame after a workout. “In those days they weren’t able to repair a horse’s foot like they can today, so he’d had it. He was a gelding and had no stud value, so they put him down.” 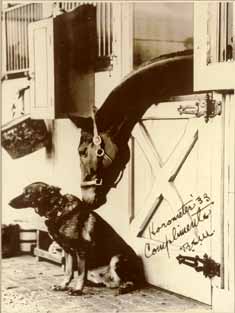