Inferno, owned by Joseph E. Seagram of Waterloo, Ont., was Canada’s first great racehorse. For years no discussion among old-timers of past King’s Plate winners, or of who was the fleetest Canadian-bred horse, could proceed until someone had said, “I mean next to Inferno, who was the most memorable?”

More than fifty years after the afternoon in 1905 when the rugged bay colt almost rope-towed the field home at Woodbine Park in the King’s Plate, Jack Thorpe would not hesitate a moment in stating that Inferno was “the greatest”. The future Hall of Fame horseman had galloped the colt and worked for three generations of the Seagram family as groom, exercise rider, jockey and trainer. “There was never in my time a Plate winner quite the equal of Inferno. The old-timers of my younger days told me that there was nothing before who was in the same class. He was the greatest.” To emphasize his opinion Thorpe told of Inferno’s performances at Saratoga Springs. “In those days there were no graded handicaps and when you ran at Saratoga you met the best in America. He won two handicaps there and he had to beat good horses.”

Inferno was by Havoc, sire of four Plate winners, and was out of Bon Ino, who had won the Plate in 1898 for Seagram. He was the odds-on 3-to-5 choice when he won the Plate. At Woodbine he won the King Edward Gold Cup three times, the Durham Cup twice and the Toronto Cup. Active until he was six, he often “spotted” his foes up to thirty pounds while setting track records. During his prodigious career his feet plagued him. They were so bad at times that a clocker, when asked where Inferno could be found, replied, “Just follow the blood marks.”

Inferno’s herculean deeds were legion, and it mattered not that when he died, he was an ill-tempered “rogue”, dangerous to the unwary and a hopeless failure at stud. He kicked down so many wooden stall gates at Seagram’s Waterloo farm that an iron door had to be placed on his stall. When he died Seagram had him opened up. “His heart was the most massive I’ve ever seen,” he said, a trifle awed. 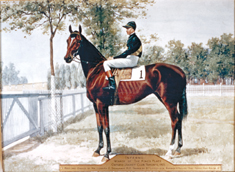