Joey was the proverbial Ugly Duckling who made good, the David pitted against many Goliaths. Sired by a broken-down race horse, Dr. Joe, and out of Aileen Hoey, who was pulling a buggy in the Alberta coal mining centre of Drumheller shortly before she foaled a horse that would become a legend on the Prairies. Joey’s breeder, Arthur Layzell, almost had him destroyed because he was such a runt. “All God’s creatures should be given a chance.” Joey and his dam were sold to C.L. (Louis) Jacques of Calgary for $200. Layzell was so astounded at the price he received for the crippled mare and her little foal that he gave Jacques $15 off the purchase price “just for luck.” Jacques owned Joey for most of his 10-year career, which saw him run in the lowest claiming races as well as top stakes company. Jacques’ son, Leo, described Joey as an “ugly duckling with a Roman nose and a rat tail.” Heart and charisma were Joey’s trademarks while competing against the leading handicappers of the Depression years in North America and Mexico, winning 55 races and placing second or third 71 times in 211 starts. His charges from the back of the pack were expected by the fans. They would wait in anticipation as he started his move, waiting for the announcer to cry out, “.and here comes Joey!” The crowd, breaking into a roar, would shout “.and there goes Joey!”

At age two he was the West’s leading juvenile. Joey caught pneumonia at three and barely survived the ordeal. He was Canada’s leading Thoroughbred and money- winner in 1935; the “Horse of the Year” in public appeal in California in 1939 and the most popular Thoroughbred in British Columbia the following year. In 1935 he defeated the East’s top money-winner Crofter at Long Branch. On the Prairies he was called the “Pony Express” but in Vancouver they dubbed him the “Toytown Express”. He was claimed several times during his career, which came to an end in 1941.

Joey returned to Winnipeg that year and was paraded through the streets as part of a war-time Victory Bonds’ ceremony at city hall. His presence helped raise $18,000. On the final day of the Manitoba racing season Joey galloped along the course as he had done so often in the past and turned into the winner’s circle for the last time while the band played “Wish Me Luck As You Wave Me Goodbye.” Joey’s fans were in tears. Unable to adjust to a life of idleness, and missing the crowds, Joey got sick and died and was buried in a poplar grove near the paddock at Calgary’s Victoria Park, just 100 yards from the track where he won his first race. 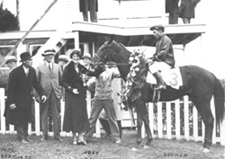