To find a longer streak by a continental North American two-year-old it was necessary to go back to a colt of another century, Tremont in 1884, who won all 13 of his starts at two, the only season he raced. How good was the filly by Buckpasser and out of Arctic Dancer – Northern Dancer’s full sister, during her unprecedented season? 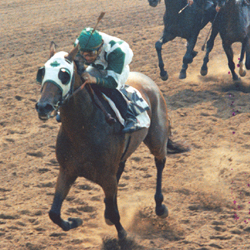 She had won by open daylight in most of her starts. Her average margin of victory exceeded six lengths. Her share of the Gardenia, the largest purse for females offered in 1972, increased La Prevoyante’s earnings to $417,109, making her the only filly in history besides Buckpasser’s other daughter, Numbered Account, to earn more than $400,000 in a single season. She had won from five furlongs to 1 1/16 miles, on grass and on dirt, against her sex and open competition, at seven different tracks, on fast, good, sloppy and slow surfaces.

In 1972 two horses dominated racing in North America. One was Secretariat, a colt that many considered the best of the century, the other La Prevoyante, who had earned accolades with a perfect 12-for-12 season. They finished one-two in the Eclipse Award voting for Horse of the Year. The filly earned Horse of the Year honors in Canada.

Secretariat and La Prevoyante met only once during their celebrated two-year-old campaigns – on October 28, 1972, at Laurel Park, Md. Running over a sloppy racetrack, La Prevoyante won the Selima Stakes by 14 lengths. A race later, Secretariat captured the Laurel Futurity by eight lengths. The distance for both races was a mile and a 16th. They each carried 122 pounds. La Prevoyante cruised home in 1:46.2 while winning her 11th in a row;  Secretariat’s clocking was 1:42.4.

Bred by Levesque, La Prevoyante has the charisma that separates the champions from the also-rans. Her only weakness, which became evident as three-year-old, was her inability to dominate in races over a mile. She had amazing speed up to seven furlongs and did win stakes races longer than a mile. Her 12-race winning streak was halted in her first start as a three-year-old, losing a sprint at Gulfstream, Fla. Later that spring she won at Keeneland, Ky., and took the La Troienne Stakes at Churchill Downs. In the Kentucky Oaks at 1 1/8 miles she opened a lead before tiring and finishing second. She won the Quebec Derby. Two of her disappointing losses came on home grounds at Woodbine in the Canadian Oaks and Queen’s Plate. Throughout her career she was ridden by either John LeBlanc or Chris Rogers.

During her perfect juvenile season she won 10 stakes races – the My Dear, Fleur de Lys, Colin, Princess Elizabeth in Canada and the Schuylerville, Matron, Spinaway, Frizette, Selima and Gardenia at New York, New Jersey and Maryland. At ages three and four La Prevoyante won 11 of 17 starts and was named Canada’s champion older filly and mare. Levesque and Starr’s exceptional female fashioned one of the most brilliant records every by a Canadian racehorse. In 39 starts she won 25 races and was in the money 33 times, earning $517,400.
Her career ended on a tragic note on December 28, 1974, when she died at Florida’s Calder track. Favorite in the Miss Florida Handicap, she faded from her normal front-running position to eighth place. She later collapsed in the unsaddling area and again in her barn, dying from a ruptured left lung and subsequent hemorrhage. 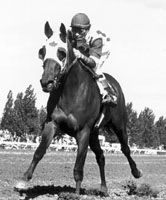