Greatness was stamped on Nijinsky II almost from the time the colt took his first unsteady steps. He was a son of Northern Dancer and Flaming Page, both winners of The Queen’s Plate. He was bred by E. P. Taylor, owned by Charles Englehard, who purchased him for $84,000, a record price for a domestic yearling at the 1968 CTHS sales at Woodbine, and trained by Vincent O’Brien.

During a brilliant 13-race career he became the first English Triple Crown winner (St. Leger, Two Thousand Guineas, Epsom Derby) in 35 years; set a European earning’s record of $677,177; was Europe’s Horse of the Year in 1970 and was syndicated for a then world-record $5.4 million.

The career of Nijinsky II began in July, 1969, at the Curragh in Ireland, where he easily won the Erne and Railway Stakes. In August he captured the Anglesey Stakes and completed his juvenile sweep, winning the Beresford Stakes. Nijinsky II was named champion 2-year-old in England and Ireland. His 3-year-old campaign began, as his career did, at the Curragh, romping to victory in the Gladness Stakes. Next came the first jewel in the Triple Crown, the Two Thousand Guineas at Newmarket. Again Nijinsky II outclassed his field. On to the English Derby, a race bookmakers said was a “certainty” for Nijinsky II. With Lester Piggott aboard he simply outraced two game finishers. After the Derby, Nijinsky II returned “home” to the Curragh to win the Irish Sweeps Derby. Then O’Brien took Nijinsky II back to England to face older horses in Ascot’s King George VI and Queen Elizabeth Stakes. Blakeney, the Epsom Derby winner of 1969, attempted to put the Canadian-bred upstart in his place but the colt couldn’t be denied.

Despite relative inactivity caused by a skin disease, Nijinsky II was the overwhelming favorite to win the St. Leger and the Triple Crown. His true class showed in the St. Leger, a demanding mile and three-quarters. One English writer reported that he “cruised home on the bit.” After winning the English Triple Crown Nijinsky II was pointed to the world-famous Prix de l’Arc de Triomphe at Longchamp in Paris. He suffered his first setback, losing by a head to Sassafras. Nijinsky II concluded his career, finishing second in the Champion Stakes at Newmarket. But his two defeats could not erase the memory of his surging, muscular charges to the wire. His earnings of $677,116, a European record at the time, also made him the greatest money-winning Canadian-bred, surpassing his sire, Northern Dancer.

Retired to Claiborne Farm in Kentucky, Nijinsky II lived up to the promises that he would pass on his speed, stamina, conformation, pedigree, temperament and soundness. Like his own sire, he became a productive and prized sire. He went on to sire English Derby winner Golden Fleece, Kentucky Derby winner Ferdinand, numerous European champions and Canadian champion Sky Classic. Nijinsky II died in April, 1992, at Claiborne and was buried between two Kentucky Derby winners – Riva Ridge and Secretariat. 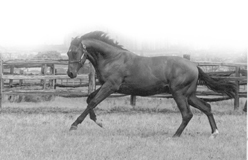