When Shepperton won the Canadian Championship (later named the Canadian International Championship) on the half-mile track at Dufferin in the war years of 1942 and 1943, his total earnings from those two victories was just $5,202. How times have changed! Now they run it for $1.5 million and in 2005 the winner’s share of Canada’s richest and most prestigious thoroughbred race was $900,000.

Shepperton was ridden by Bobby Watson in his Canadian Championship wins. The chestnut horse did not run in the Championship in 1944, but Shepperton was still turning in some impressive races. In the Bryan and O’Hara Memorial Handicap at Toronto’s Old Woodbine, he carried 138 pounds to victory in the 1 1/16 mile race in the track record time of 1:44 3/5. “He (Shepperton) went to the front without any special urging and won comfortably,” said the Thoroughbred Record. “This is probably the best Canadian-bred we have seen in many years.” He was a superb weight carrier, often winning while carrying up to 140 pounds.

Bred, trained and owned by Fred Schelke of Gormley, Ont., Shepperton was “the wonder horse” of his time. He was a confirmed cripple from birth but a great race horse nevertheless. Jockey Willie Holborn, who exercised him in his early trials and for nearly all his racing years, said he was the easiest horse to ride of any that he ever worked. “It was like sitting in a rocking chair and going for a pleasure ride,” he said. Injuries prevented Schelke from racing him as a 2-year-old and also knocked him out of the 1942 King’s Plate.

In 1944, as a 5-year-old, Shepperton won three of his five starts. But his best years were at three and four. In 1942, he won six races, was second seven times and third once in 17 starts and in 1943, he won nine of fourteen races and was out of the money only twice. He raced from 1942 to 1948, winning 22 of his 54 starts, finishing second eleven times and third five times. Besides his Canadian Championship wins and the Bryan and O’Hara Memorial, his important wins included the Breeders’ Stakes and Autumn Handicap in 1942 and the Jubilee Handicap in 1943. 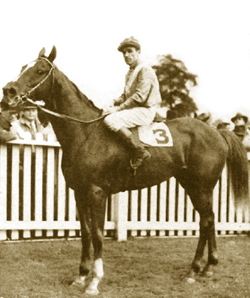