The Johnny Longden story did not have a very auspicious beginning. But it had a sensational climax. Longden, a native of Wakefield, England, was born on February 14, 1907, and moved with his family to Canada at the age of five. He and his mother and three sisters were to take the journey to Canada on the maiden voyage of the Titanic and join Longden’s father in Calgary. However, their train to Southampton was late and they missed the departure of the ill-fated liner. When he was old enough he joined his father in the ore mines in southern Alberta, working as a $1 a day grease pig, coating the wheels of ore cars. A fellow worker taught him how to ride Roman-style, striding atop a pair of animals. By 14 he was riding at bush tracks, where one of his rivals was George Woolf of nearby Cardston, Alta. The lure of the prairie race tracks was great and it was where he learned the tricks of the trade – some of them legal – that he later used to great success at Churchill Downs and other major U.S. tracks. 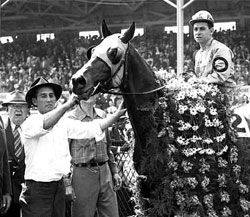 At the age of 20, Longden hopped a freight train south to Salt Lake City, where he convinced a trainer he could ride. His first mount was Hugo K. Asher, a nine-year-old gelding. The gelding won at odds of 16-to-1and never won another race. Longden could have been excused if he went back to the mines after his first year of riding. The man who was to become the world’s winningest jockey earned $980 that first year, 1927. It was not until 1935 that Longden’s annual purse earnings hit the $100,000 mark. Over the next 32 years his mounts never failed to earn less than $100,000 a year, and indeed in eight of those brilliant years, Longden-ridden thoroughbreds romped home with over $1 million in earnings. It was a long way from his first victory to his last. Longden’s final win was one of the greatest moments in sports history, one of those rare events that thousands claim to have seen in person.

The year was 1966, the scene was a jam-packed Santa Anita Park, the race was the San Juan Capistrano Handicap and the horse was the Canadian-bred George Royal. Longden won it, of course, pumping George Royal to a heart-stopping nose victory for the 6,032nd win of his career. The throng knew it was Longden’s farewell ride, and there are those who claim the cheers are still echoing in the San Gabriel Mountains behind Santa Anita. Vancouver racing fans will never forget the day in 1965 when Longden got home aboard Prince Scorpion at Exhibition Park for his 6,000th career win. Longden also won the Canadian International Championship on George Royal. “I was pretty lucky riding in Canada over all, “said Longden.” I won races in Saskatoon, Regina, Calgary and Winnipeg and I won at Dufferin Park, Old Woodbine and the new Woodbine in Toronto.” In his fourth attempt to win the Queen’s Plate, Longden was beaten a nose when his mount, Just Don’t Shove, lost a photo decision to Blue Light. 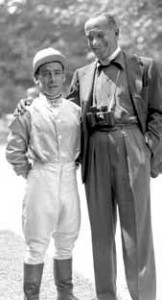 In September of 1956 he rode winner number 4,891 to make him number one in the world. Longden always said the best horse he ever rode was Count Fleet, who won the Triple Crown in 1943. He won 16 races and was second four times and third once in 21 starts. He rode countless champions – Swaps, Noor, Busher, Whirlaway, Your Host, TV Lark and Four-and-Twenty. Three times he led all jockeys in races won and twice in purse earnings.

In 1966, at the age of 59, Longden’s back was sore. He was aching with arthritis from the countless broken bones and assorted injuries he had suffered during his exceptional career, and was struggling to keep his weight below 120, when he announced his retirement. Longden won 6,032 races and his mounts earned more than $24 million. He rode into the winner’s circle a remarkable 19 percent of the time he was hoisted aboard a race horse.

As a trainer, he narrowly missed winning the Triple Crown in 1969 when he saddled Majestic Prince for Calgary’s Frank McMahon. The horse had won Kentucky Derby and the Preakness Stakes. Longden didn’t want him to run in the Belmont, saying he was tired and needed a rest. McMahon overruled Longden and Majestic Prince was beaten by almost six lengths by Arts and Letters. The colt never raced again. Longden, who retired from training in 1990, won 370 races during a 23-year career as a trainer. In 1994 he received a special Eclipse Award as one of the founders (along with his old rival George Woolf) of the Jockey’s Guild in 1941. A bust of Longden was unveiled at Santa Anita and a street in nearby Arcadia, Calif., was named Longden Boulevard. He died on his 96th birthday, February 14, 2003, in Banning, Calif.