As a 20-year-old in 1935, William (Smokey) Saunders would achieve a memorable accomplishment when he became the youngest jockey to ever win the U.S. Triple Crown when he guided Omaha, a towering, long-bodied colt, to convincing wins in the Kentucky Derby, Preakness Stakes and Belmont Stakes for William Woodward’s famed Belair Stud Stable.(Smokey’s feat of being the youngest to win the Triple Crown stood until 1978 when 18 year-old Steve Cauthen won it on Affirmed.)  Saunders and Omaha were perfect fit as he had the skill to curtail Omaha’s nasty trait of “savaging” horses that bumped or brushed him. A son of Triple Crown winner Gallant Fox, Omaha attempted to bite a horse if it got too close said Saunders years later. 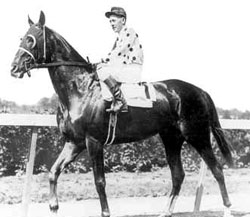 Equally significant is the fact that for the remainder of his Saunders’ career, which ended in1950, he rode in only one more Triple Crown race, the 1948 Preakness at Pimlico when he finished third on Bovard behind one of America’s greatest horses and Triple Crown winner Citation.

Saunders was born in Bozeman, Mont., in 1915.When he was eight years old his parents moved to Calgary, Alta. He was raised on the tracks there, walking “hots”, galloping and exercising horses. Later he returned to Montana to enter high school, but a Chicago trainer, took him to the races and put him under contract. On April 14, 1932, Saunders rode his first winner at Tanforan. His big break came when his contract was transferred to trainer Sunny Jim Fitzsimmons, who hired him to ride for the Phipps Stable and Belair Stud Stable, two of the major outfits in the U.S. He later rode for Hal Price Headley’s stable, where he became the first-string jockey, riding such horses as Whooper, Tread Avon and Plucky Play.

Weight problems halted the career of the Calgary rider as he ballooned to 135 pounds prior to the World War II. Saunders spent four years in the U.S. Army, serving in the South Pacific. A bout with malaria left him lighter and following the end of the war he began his second riding career, one that was climaxed in1948 with a win in the Louisiana Derby on Bovard. Saunders retired in 1950 and later served as a racing official at tracks in Florida, Illinois and New Jersey.