In 1919 Sir Barton, a Kentucky-bred colt owned by Canada’s Commander J.K.L. Ross, captured the Kentucky Derby, Preakness and Belmont Stakes to become America’s first Triple Crown winner, an honor that wasn’t officially bestowed until 1948. Ross, the leading money-winning owner in the U.S. in 1918 and 1919, purchased the colt privately for “about” $10,000 as a 2-year-old from owner and breeder John E. Madden. 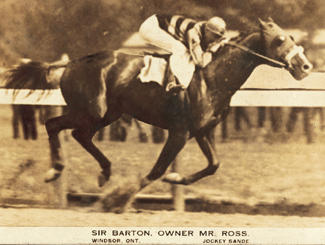 Sir Barton had only a second place finish in the Futurity at Belmont as his best effort in six starts in 1918. But he closed bravely, showing a glimmer of his true racing ability for new trainer H. Guy Bedwell. Sir Barton made his 3-year-old debut in the Kentucky Derby, in which he did two things he had never before done; show speed from the gate and win over stablemate Billy Kelly and the favored Eternal. Four days later at the Preakness in Pimlico, Sir Barton again beat Eternal. Showing greatness ten days later, Sir Barton was the odds-on favorite in the Withers Stakes at Belmont, beating Eternal again. His winning margin in the Belmont was five lengths as he set a U.S. record of 2:17 2/5ths for 1 3/8 miles. Four stakes race victories in a total of 32 days! Before the year was out Sir Barton would also win the Potomac and Maryland Handicaps, the Pimlico Special and Fall Serial.

A son of the blind sire Star Shoot, Sir Barton was like many of his offspring and was plagued with tender feet. His shoeing was an intricate undertaking and the shelly-footed colt often lost his shoes during a race. In one race he lost all four shoes. It was always necessary to insert a strip of piano felt between the shoe and his foot. At age four he dominated the handicap ranks, often toting more than 130 pounds. He won a handicap at Havre de Grace, then the Rennert and Saratoga Handicaps before shipping to Fort Erie to win the Dominion Handicap, and later the Merchants and Citizens’ at Saratoga, N.Y.

Earl Sande said his most memorable ride of his career came on Sir Barton in the Saratoga Handicap when his colt carried 129 pounds and defeated future Hall of Famer Exterminator in track record time of 2:01 4/5 for 1 1/4 miles. Years after retiring Sande said it was “the best performance of a horse – time, weight and class of opponents considered – I have ever witnessed. He gave all the best handicap horses weight and decisive beatings, setting his own pace all the way.” Ten days later, Sir Barton set a world record of 1:55 3/5th for 1 3/16th miles, carrying 133 pounds and giving away 18 pounds while winning the Merchants and Citizens’ Handicap by a nose.

His next race would make horse-racing history in Canada at Kenilworth Park in Windsor when Sir Barton met the sensational 3-year-old Man o’ War in a match race for $75,000 and a $5,000 gold cup. Sir Barton, his tender feet apparently bothering him on the hard track, was no match for Man o’ War, who won by seven lengths. Sir Barton was never quite the same after that match race. He raced three more times that year, finishing second once and third twice, ending his career with 12 wins, six seconds and five thirds in 31 starts. He was a disappointment at stud and died in 1937 as a U.S. Army Remount stallion at Douglas, Wyoming. In his last days his stud fee was said to be $5 to $10.