On the June 11 afternoon in 1960 that Victoria Park might have won the famed Belmont Stakes in New York, he was at Woodbine, acting like a big kid with the children, running the fastest Queen’s Plate in history (2:02). It would be 30 years before another horse (Izvestia) would clip a fifth of a second off “Ol’ Pigeon Toes” record. No Canadian-bred had ever won the mile and one-half Belmont, the one horsemen describe as the “classic test of stamina and courage.” Victoria Park looked like he could win the longest of the Triple Crown events. In May he had become the first Canadian-bred colt to finish third in the Kentucky Derby. Two weeks later he was second in the Preakness at Pimlico. But then came the Plate/Belmont scheduling conflict.

If he ever regretted the decision to go after the Plate instead of the Belmont, which was won by Celtic Ash, a horse that Victoria Park had repeatedly manhandled that spring, owner E.P. Taylor never publicly admitted remorse. He never wavered from his commitment that the Canadian public was entitled to see the colt in the country’s most important race. In the first six months of 1960, Victoria Park had done more for Canadian breeding than any previous home-bred had done in a lifetime: multiple stakes winner in two countries, first horse to earn more than $100,000 in a season, and a record career bankroll of $250,000.

At age two Victoria Park set one track record and equaled two others, winning the Clarendon, Coronation Futurity and Cup and Saucer Stakes. With those credentials he went to New York, winning the Remsen Stakes under top weight of 124 pounds. In February the colt debuted on Derby trail, defeating Bally Ache with a track-record time for 1 1/16 miles at Hialeah. After a second and third in the Flamingo Stakes and Florida Derby, he headed to Churchill Downs and the Derby to become the first Canadian-bred to to finsh on the board in a Triple Crown event. He beat Derby winner Venetian Way in the Preakness while finishing second to Bally Ache. After his Plate victory he cruised to a nine-furlong track record at Delaware in the Leonard Richard Stakes. A California campaign was cancelled when the colt arrived there with a bowed tendon and the decision was made to retire him.

Victoria Park was another E.P. Taylor homebred rejected as a yearling. Pre-priced in 1958 at $12,500, there were no takers, due primarily to his suspicious knees, a pronounced “toeing-in” and a somewhat diminutive stature. In 1983 Victoria Park was retired from stud duty at the age of 26. Among the more than 25 stakes winners he sired were three consecutive Queen’s Plate winners – Almoner, Kennedy Road and Victoria Song. However, Victoria Park’s greatest distinction was as a broodmare sire. His daughters foaled more than 50 stakes winners and they include The Minstrel, Storm Bird and Northernette. Victoria Park died in 1985 and was buried at Windfields. 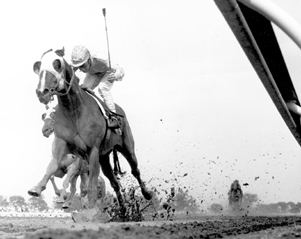