Although he rode on recognized tracks for only 13 years, often accepting fewer than 300 mounts per year, Woolf won 97 major stakes races in the U.S. at a time when there were far fewer added-money events than today. He demanded and got the $1,000 in advance plus ten per cent of the purse to ride in stakes races during the Depression years. His mounts included such immortals as Whirlaway, Alsab, Devil Diver, Occupy, Pavot, Kayak II, StandPat, Challedon, Bold Venture, Bymeabond, Askmenow, and, his favourite mount of all, Seabiscuit. In 1942 Woolf was the leading money-winning jockey in North America, although he rode in only 263 races. He cutback to only 227 mounts in 1944 when diabetes was leaving him weakened some of the time, yet, incredibly once again was North America’s top money-winning jockey.

George Woolf won four American classics three times each – the Belmont Futurity, Hollywood Gold Cup, Havre de Grace Handicap and American Derby. Undoubtedly the biggest ride of his career came aboard the legendary Seabiscuit when he upset Triple Crown winner War Admiral with as fine a front-end rating job as had ever been seen, tow in a much-ballyhooed match race at Pimlico, Md., in 1938. It was the bane of his life that, although he finished second twice, he was unsuccessful in nine attempts to win the Kentucky Derby. However, he did boot home the winners of the Preakness Stakes, Santa Anita Handicap, Jockey Club Gold Cup, Lawrence Realization, Hopeful Stakes, Hollywood Derby, Hawthorne Gold Cup, Dixie Handicap, and scores more of the top races of his day. 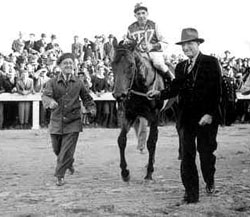 victory at Pimlico over War Admiral, Woolf, a diabetic, could not reduce and planned to retire at the end of 1946. It is ironic that he was killed in a race with a purse of $3,500, one of the few non-handicap races in which he competed in his later years. He was riding Please Me in the fourth race at Santa Anita on January 3, 1946. His horse was on the lead, freed from interference, entering the clubhouse turn when it appeared to stumble, pitching Woolf over his head. He died 12 hours later as doctors considered surgery to relieve pressure on his brain. His friend Johnny Longden had a mount in that race.

A bronze statue honours him at the California track, and his memory is further preserved by the George Woolf Memorial Award, presented each year to the jockey best combining riding ability with the personal qualities that made the Cardston cowboy a giant in his profession. “George had a lot of character,” Longden says in B.K. Beckwith’s book, The Longden Legend. “He had strong ideas about the rights of jockeys. He didn’t like the way many officials tried to intimidate riders. I felt the same way, and because of this we started the Jockey’s Guild. It was not formed as a union, but rather to protect racing and the public, as well as to protect ourselves. George and I felt we should have some say in cleaning our own house, have some say in our own defense and our own punishment. It was a hard fight to get organized as a group and to be heard, but we did it, and I think it was one of the best things we ever did for racing. I recall at first we had to meet in secret, because we had been warned that if we persisted with the idea we would be ruled off.” 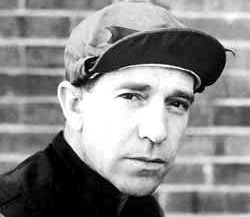