Armbro Flight was one of North America’s greatest trotting mares of the 1960s. Her accomplishments were meaningful enough to be honored by Canada Post with the issuance of a commemorative postage stamp in 1999 along with three other horses, one of which was thoroughbred legend Northern Dancer. The stamp depicted her in action with Joe O’Brien, who drove and trained her throughout her career.

Bred and owned by Elgin, Ted and Charles Armstrong of Brampton, Ont., Armbro Flight retired from racing in 1966 as the greatest money-winning ($493,602) Canadian-owned standardbred, regardless of age, sex or gait, in history and the greatest money-winning trotting mare in North America. Her breeding was regal, a daughter of Hambletonian champion Helicopter and by Stars Pride. She established five world records, was voted Canadian Trotting Association “Horse of the Year” for 1964, 1965 and 1966 and won 51 of 65 career starts at ages two, three and four. She was retired from racing after beating the best trotters in the world in the 1966 $100,000 Roosevelt International Trot at Roosevelt Raceway, N.Y. She then became one of Canada’s greatest broodmares. 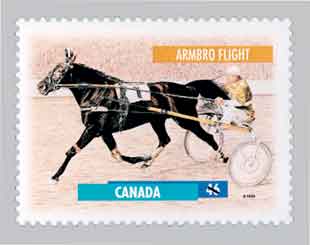 In her juvenile season of 1964, Armbro Flight won 20 of 26 starts and earned $107,452, the most ever in a single season by a two-year-old filly. Her wins in stakes events at two included the W. N. Reynolds Memorial, Battle of Saratoga, Acorn, Arden Downs, Hanover-Hempt Farms, Proximity, Canadian Standardbred Futurity, Breeders Filly, Lou Dillon Trot and Eaton Ridge Stakes.

At age three she won 22 of 26 starts. Considered the highlight of her 3-year-old season was her performance in the Hambletonian Stakes, trotting’s most prestigious event at DuQuoin. The only filly in the field, she forced a fourth-heat raceoff by winning the third heat and was narrowly beaten in the three-horse final. After that, she beat her male adversaries in the Horseman Futurity, Kentucky Futurity and Dexter Cup and climaxed the year by winning against older horses in the American Trotting Classic. Her other wins at three included the Coaching Club Trotting Oaks, Floras Temple, Reynolds Memorial, Hanover-Hempt Farms, Battle of Saratoga, Hanover Filly, Hudson Filly, Arden Downs and Breeders Filly. 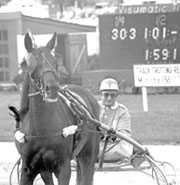