If a screenwriter was to make the Fresh Yankee story into a movie, chances are that most of the audience would accept it as pure fiction. Such success stories, they would argue, rarely happen in real life. How many times have you heard of a $900 investment earning more than $1 million in purses in the era when this incredible trotting mare was dazzling fans across North America and Europe? Her victories today would equate to more than $3 million.

Truth is often stranger than fiction, especially in the saga of Fresh Yankee, which started innocently enough when Duncan MacDonald of Sydney, N.S., went out to buy a hobby horse. He wanted a horse he could jog and perhaps train in his Cape Breton hometown. At the 1964 yearling sales in Harrisburg, Pa., he paid $900 for a daughter of Hickory Pride that had been consigned to the sales by former New York Yankees’ outfielder Charley Keller. It seemed an innocent enough transaction at the time for MacDonald until the frugal Scotsman learned it would cost more to ship the filly to Sydney than she cost in the first place. He found a solution. He turned the filly over to veteran horseman Sanders Russell, who had room in his van for one more yearling to take to his Alabama farm. MacDonald shared ownership of the filly with Richard and Dorothy Logue, also of Sydney, until he assumed sole ownership in 1968.

Sanders, who developed Fresh Yankee, bowed out after her 3-year-old campaign. He was 69 and unwilling to face the exhausting pace that was slated for the race mare in 1969. MacDonald moved his prize mare to the stable of Joe O’Brien, who developed a special rapport with the mare and played a major role as she became the first North American-bred trotter to win $1 million.The summary of her eight-year career: 89 wins, 44 seconds and 24 thirds in 191 starts for $1.2 million while setting or equaling five world records against the best trotters, male or female, in the world. 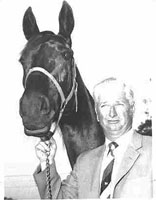 Her awards and championships would fill a page – the USTA awarded Fresh Yankee Horse of the Year honors in 1970 and the Trotting Mare of the Year four times – 1969 to 1972. The CTA named her Horse of the Year in 1970 and the top Aged Trotter a record six times – 1968 to 1972. Each year she lowered her world records in time trials and classic races at various distances, from half-mile to mile tracks. Her ultimate mark was a 1:57.1 time trial in 1967 when she became the fastest trotting mare in history. When she won the American Trotting Classic consolation in 1:58 in 1968 she equaled the world record for aged trotting mares. The following year she upset Horse of the Year Nevele Pride in 1:59.2f, a world record for aged mares on a 5/8th-mile track, a record she lowered to 1:58.4f the following year.

Fresh Yankee’s greatness was defined by her performances in the Roosevelt International Trot, which brought together the best trotters in the world. She represented Canada in six editions. After frustrating losses to the French mares Rocquepine (twice) and Une de Mai, she finally prevailed in 1970. In Europe she triumphed in the Grand Prix of Bavaria and International Elite Trot. Her career came to an end in 1972. MacDonald vanned her to Halifax’s Sackville Downs for an emotional farewell with her original trainer, Sanders Russell, holding the reins. Her retirement was now official when her shoes were removed amid cheers and few dry eyes. She retired as the second richest money-winning trotter in the world and died in 1991 at the age of 28. 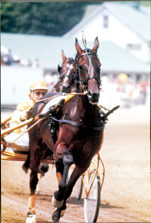