In 1928 the undisputed king of the harness racing world was Grattan Bars – no small accomplishment for a horse which cost his owner just $10. This bay bombshell overwhelmed everything in sight that year, much to the delight of his owner, Fred Thrower of Kerwood, Ont. Thrower had obtained Grattan Bars from breeder Archie Pedden of nearby Strathroy by trading him 13 calves. Since Pedden threw in $200 with Grattan Bars, and since the calves had cost Thrower $210, his net cost for Grattan Bars was a mere $10.

For two dazzling months he was almost unbeatable. During a 13-day stretch he reeled off victories in three $25,000 races, huge purse money in those days. Horsemen watched in disbelief as the wonder horse from Canada knocked off all opposition. American horsemen in particular were stunned. Several are reported to have offered Thrower $25,000 for his charge, but he refused to sell.

At age four, Grattan Bars began to show that he was something special. Ontario racing fans were amazed as the bay horse won 11 consecutive races, setting nine track records in the process. Not until in 1928, did Grattan Bars venture south of the border. Vic Fleming drove him in most of his races, and the pair was almost unbeatable.

He started his streak by winning the Windsor Pacing Stakes at Windsor, Conn., despite advice from the track veterinarian that the horse wasn’t up to par physically and should be withdrawn. Grattan Bars won the final heat that day by a neck in a thrilling come-from-behind effort. Four days later it was on to Fort Miami Park in Toledo, Ohio, and another $25,000 race. He won all three heats. Then on to Kalamazoo, Mich., and the American Pacing Derby. He won it in straight heats, taking the second in 1:59 1/2, giving him a sweep of three major U.S. events.

After picking up a few more minor wins, Grattan Bars was retired with a record $46,915 on his card for a single season. Fleming often stated that Grattan Bars was the fastest horse he ever drove, with the sole exception of Billy Direct, and coming from a man who drove 12 horses to the 2:00 list, this was a mighty high tribute.

The Grattan Bars’ story is even more incredulous when one considers his role as a sire; he bred approximately 40 mares during his racing career and while racing in 1928 was the father of 36 sons and daughters. 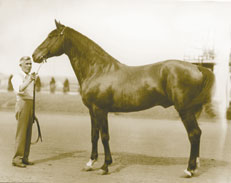