Harness racing history is studded with Cinderella stories, the rags-to-riches yarns that dreams are made of. One horse that deserves the Cinderella label is Invincible Shadow, a castoff from the prestigious Joe O’Brien Stable. The quiet-spoken, silver-thatched native of Prince Edward Island was not known for his mistakes in harness racing. O’Brien was also a patient man, but one horse he erred on was Invincible Shadow, who stunned the experts by his performances in the handicap ranks in 1973 and 1974.

O’Brien purchased the Shadow Wave-I’m It colt for $16,000 as a yearling. Yet in four starts as a two and three, Invincible Shadow did not return O’Brien a nickel on his investment. It’s a small wonder, therefore, that in February of 1973, O’Brien put him on the auction block at Hollywood Park. It was at this point that Jim Miller, a native of British Columbia living in Fresno, Calif., entered the picture and bought the colt for $5,500, acting as an agent for John Graham of Aldergrove, B.C. Graham wanted the horse to serve as a stallion for his broodmares at his farm in the Fraser Valley. But to enhance his stud value, it was decided to give the horse a mark of around 2:05, if possible, as Graham knew that a 2:05 pacer in B.C. would be impressive. But no one had any idea that this decision to race the colt for a “mark” would cause a major upheaval in the sport for the next two years.

Trained and driven by Miller, Invincible Shadow went on to win 11 of 19 starts in 1973, registering three miles in 1:58.2 or better, and knocking off Armbro Nesbit and Horse Of The Year Sir Dalrae in Hollywood Park’s American Pacing Classic. He came from 11th place at the three-quarters to win the mile and one-eighth race in 2:11.3. The following year Invincible Shadow proved his 1973 campaign was not a fluke. In 1974 he compiled a record of 9-6-2 in 26 races while lowering his speed mark to 1:56 in the Dan Parish Memorial Stakes at Liberty Bell in May. That made him a world champion with the fastest mile on a 5/8ths-mile track. He also won the Canadian Cup and the General Mad Anthony Pace; was second in the Canadian Pacing Derby, the Provincial Cup and the U.S. Pacing Championship.

After standing a season at stud in B.C., Invincible Shadow returned to the races in California in the autumn of 1975, and right away began winning races under 2:00. 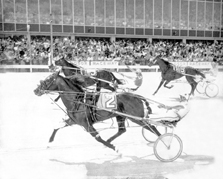