Winning the Little Brown Jug is the ultimate goal of any owner of a pacing colt. The Jug is the Kentucky Derby of harness racing (along with the Hambletonian for trotters) and John G. Hayes, a Beamsville, Ont., horseman who was never reluctant to express his views, said he would “rather win the Little Brown Jug than go to heaven.” Along came a precocious chestnut colt named Strike Out that made the obsession a reality.

Not only did Strike Out win “the Jug,” in world record time, he carved out a sensational career over two seasons. He was named the leading juvenile pacing colt in North America in 1971 and the following year was voted the top 3-year-old. Co-owned by Hayes and Robert and Conrad Shapiro of Montreal, Strike Out was another of those Cinderella buys. The shrewd Hayes felt everything was in this package and was prepared to open bidding at $25,000 at the yearling sales. However, the crowd was still buzzing about the previous sale, a filly going for $70,000. Hayes was shocked when the hammer came down on his $15,000 bid for the Bret Hanover colt.

Strike Out showed exceptional promise early, winning a qualifying race in 2:07f and a week later Hayes startled horsemen at Greenwood when he entered Strike Out in his first purse start against older horses. He won. His stakes campaign began with a seven-length win in the Geer at Hazel Park. He then went on to win the Fox, Roosevelt Futurity, Hanover-Hempt Farms, Tom Hal, Reynolds Memorial, Count B, Golden Blend and the Florida Breeders while compiling 14 wins in 19 starts. He earned a 1:57 clocking and was the leading money-winning juvenile pacer that year. One of his defeats came at the hands of his career-long nemesis, Silent Majority, in the Canadian Juvenile Circuit event. He had defeated Silent Majority in the Roosevelt Futurity in their only previous meeting and Strike Out was riding an eight-race winning streak.

In 1972 Strike Out won 15 races. His victories included Canada’s first-ever $100,000 race, the Prix d’Ete at Blue Bonnets, Adios, Battle of Saratoga, Best of All, Reynolds Memorial, Gaines Memorial, Tattersalls, Beaver and Florida Breeders, but all these classic wins were overshadowed by his Little Brown Jug triumph. Hayes, who often employed catch drivers because of health problems, went to Keith Waples. His strategy was to have Waples drive Strike Out as often as possible because, as Hayes asserted, “He’s for damn sure the best driver in Canada, so why shouldn’t he be driving the best horse?” After a first heat win in 1:58.1 at the half-mile Delaware oval, he won the second heat in world record time of 1:56.3h, breaking the record set by his sire. Strike Out became the first Canadian-owned horse to win the Little Brown Jug. 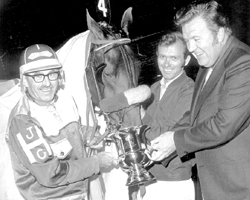