Harness racing’s purists often insist that the sight of a field of speedy trotters coming off the final turn and fanning out across the width of the stretch is one of the most beautiful sights in racing. And one of the “most beautiful trotters” in the history of Canadian racing was Tie Silk, owned by Adrien and Gerard Miron of St. Augustin Deux Montagnes, Que. The brown son of Rodney and Pure Silk, a Volomite mare, started many a railbird’s heart-a-racing as he high-stepped through the stretch, head high, coming up on the outside to grab the winner’s share of the purse.

This was similar to the sight of his greatest triumph in 1962 when Tie Silk became the first Canadian-owned horse to win the most important trotting event for older horses in North America, The Roosevelt International at Westbury, N.Y. One of Canada’s great reinsmen, Keith Waples, who drove him throughout much of his career, was in the bike. This race annually attracts the leading trotters in the world.

A winner of $365,804 during his seven-year racing career, Tie Silk retired following the 1964 season as Canada’s leading money-winning trotter and a victor in many of Canada’s premier events. He was a three-time winner of the Maple Leaf Trot at Greenwood and Blue Bonnets’ Provincial Trot and many other invitation races. He concluded his racing career with five wins in a row, winning his finale at Blue Bonnets with Marcel Dostie in the bike. Tie Silk went to stud in 1965 at Fermes Miron Farms, Inc., Miron’s stallion station in Quebec.

Bred by Walnut Hall Farm in Lexington, Tie Silk was a foal of 1956 He raced at two and three under the guidance of Canada’s Ralph Baldwin and was second to his stablemate Diller Hanover in the 1959 Hambletonian. He gained his lifetime mark of 2:00 2/5 over a mile track that year. At the end of his 3-year-old season he was sold at auction to the Miron brothers for $40,000. His early years were like that of most young trotters as he had difficulty staying on the trotting gait. However, his speed would soon make one forget the odd missed step. Later in his career Tie Silk settled down and those dreaded “x’s” that dot the past performance chart signifying breaks rarely appeared. 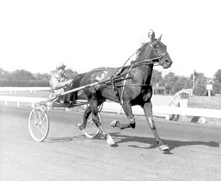