In the annals of Canadian horse racing, two names dominate – E.P. Taylor of Windfields Farm and J. Elgin Armstrong of Armstrong Brothers. What Taylor did to elevate Canada into a global Thoroughbred presence, the Armstrong Brothers – Elgin and his brother Ted – did with as much dominance and success world-wide for Standardbred racing. Prior to his death on New Year’s Eve in 1978 at Pompano, Fla., ABC Farms was located on Highway #7 in Brampton. The move to the sprawling 1,100-acre farm, with its bright orange barns and buildings at Inglewood, came in 1979. Elgin, who had put a lot of thought into the planning of the new farm, unfortunately did not live to see it completed.

Born in 1897 on a farm in the Brampton area, Elgin Armstrong initially raced some standardbreds at local fairs. In 1952 he increased his interest in harness racing when he met “Mr. Harness Racing”, trainer Del Miller, at a track in Orlando, Fla., and acquired Helicopter, a 2-year-old filly by Hambletonian winner Hoot Mon. After finishing 17th in the first heat of the famed trotting classic, she won the next two heats for driver Harry Harvey and became both the first Canadian-owned horse to capture the race and first to emulate its sire. His astute purchase of Helicopter was no fluke as his next acquisition was future World Champion pacing mare Dotties Pick. Dotties Pick and Helicopter’s exceptional World Champion record-setting daughter, Armbro Flight, were the keys to Armstrongs’ achievements as rival to the much-larger Hanover Shoe Farm in Pennsylvania.

Armstrong-owned and bred Standardbreds won every major race in North America – the Little Brown Jug, Cane, Messenger, Kentucky Futurity, Roosevelt International and Prix d’Ete. Besides developing one of the greatest collections of broodmares (he had a preference for daughters of Adios) on the continent, Armstrong Farms stood several of the sport’s prolific stallions – Dexter Nukes, Armbro Omaha, Dream of Glory, Horton Hanover and Armbro Jet. The parade of Armbro trotters and pacers would also include Armbro Goal, Armbro Regina, Armbro Feather, Armbo Ermine, Armbro Florie and Armbro Fling.

The cattleman and road builder initially was impressed with the attitude of the trainers in the sport. The trainers talked about “performance of a horse” rather than the odds the horse might be at in a race. Performance remained uppermost in the mind of Elgin and performance best describes the achievements of the trotters and pacers that raced under the Armbro banner for him, his brother Ted (who focused mainly on the construction side of the firm) and Elgin’s son Charles. A valuable acquisition by the Armstrongs came in 1958 when Dr. Glen Brown was hired as farm manager and veterinarian for the fledgling ABC Farms. After Elgin’s death Dr. Brown became president and general manager of the world-class breeding facility.

Elgin and Ted entered the construction business in 1929 and became one of the major builders of highways and airport runways in Canada. In the early 1940s the Armstrongs developed one of the great Holstein-Friesian herds of cattle in North America. Their ABC Farms were renowned and in 1945 it dominated the Hackney pony classes at shows throughout the continent. It also had success in the show jumping world.

In the 1950s Elgin entered the thoroughbred racing and breeding business, buying 20 broodmares and standing several imported stallions – Nearco Jr., Running Water, Curry and Pipe Royal. Hall of Fame trainer Art Warner handled the thoroughbred side of the Armstrong stable, winning numerous stakes races with Speedy Lament, Speedy Sonnet and Lady Ruth. For a period in the 1960s Armstrong was ranked among the leading thoroughbred breeders in Canada. However, in 1968 Armstrong disbanded his thoroughbred operation.

During his career he was a member of The Hambletonian Society, trustee of The Trotting Horse Museum and Hall of Fame at Goshen, N.Y., a director of The Ontario Jockey Club and the Standardbred Breeders Association Inc., a member of the Little Brown Jug Society and a Kentucky Colonel.

Armstrong’s one smoldering affectation, besides his love for horses, was a big cigar. His shirt pocket carried a supply, which he often handed out to associates. Passersby on the old farm off Highway #7 often saw Elgin cruising about the paddocks and fields in his Caddie – a big, black Cadillac. 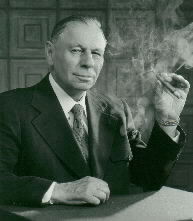