Trace the bloodlines of the William Hendrie family of Hamilton, Ont., and you’ll have a good idea of the history of thoroughbred racing in this country. A Scotsman and former clerk with the Great Western Railway, Hendrie’s initial brush with horses was through the draught horses that helped him develop Canada’s largest cartage business. He originated a rapid and economical delivery of railway freight.

A gentleman with an ardent passion of the sport of racing, Hendrie’s favorite pastime was wandering through the fields of his Valley Farm watching thoroughbreds in the paddocks. Like all owners he was fond of winning, but his successes were not measured by monetary figures. He never bet on his horses. The pleasure of seeing his horse cross the finish line first was all satisfying. It was never more satisfying than in 1899 when his bay filly Butter Scotch halted Seagram Stable’s incredible streak of eight Plate wins in a row.

“After eight years of wearing the ‘black and yellow’, it was time for a change,” said a writer in the Hamilton Spectator. Wearing a tie or scarf in the colors of the Plate winner was a custom the haberdashers encouraged in this period. Thus the sight of Hendrie’s silks, a brown jacket with yellow sleeves, barging past the older and more experienced Dalmoor, Joseph Seagram’s odds-on favorite, caused pandemonium at Woodbine Park. The following year Hendrie’s entry, The Provost, lost by a neck to heavily favored Dalmoor. However, in 1902, following the death of Queen Victoria, Hendrie captured the first running of the King’s Plate with Lyddite.

His best horse was Martimas, which won The Futurity in New York in 1898, the premier race for two-year-olds in the United States. A philanthropist, Hendrie donated part of Martimas’ purse for the construction of a new wing at Hamilton General Hospital. Martimas and Hendrie’s veteran trainer, Edward Whyte, were inducted into the Legends category of the Canadian Horse Racing Hall of Fame in 2001. Hendrie’s sons – Colonel John S. Hendrie and George M. Hendrie – would win the Plate in 1909 and 1910. George also won in 1918.

William Hendrie, the 74-year-old self-made tycoon died in 1906, two months after he had become the first Canadian to be named an honorary member of Britain’s Jockey Club. 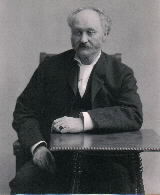