More than any other race, Jean-Louis Lévesque wanted to win the Queen’s Plate. He had been close in nine attempts but never a winner until 1975 when this ambition finally was realized when L’Enjoleur won the 116th running of the Plate. Lévesque had won many important races in Canada and the United States, but this was the most satisfying. Lévesque was born in Gaspe, Quebec, and grew up around rental horses. A graduate of St. Dunstan’s University, Lévesque rose from a clerical position in a bank to build a financial empire. In 1956, he bought a couple of standardbreds and their success gave racing a strong hold on Lévesque.

Lévesque founded Transcanada Funds, a holding company, which he later sold to Power Corporation. Among his philanthropies, Lévesque administered a multi-million dollar fund that provided scholarships to Quebec students and research grants for Montreal hospitals. When Transcanada purchased Blue Bonnets in Montreal in 1959 for $4.5-million, the track held only harness racing. Lévesque, feeling variety was needed, encouraged the track’s directors to buy thoroughbreds and support a return of the runners to Montreal. To initiate their return Lévesque bought four horses from a friend in Miami for $5,000. He owned Blue Bonnets until 1973 and later owned Windsor Raceway.

In 1962, Lévesque paid $20,000 for a filly by Chop Chop from Windy Answer that he named Ciboulette. Ciboulette won four stakes and was mated with Northern Dancer to produce Fanfreluche, Canada’s Horse of the Year in 1970 when she defeated the top U.S. 3-year-old fillies in Saratoga’s Alabama Stakes. Fanfreluche is the dam of L’Enjoleur, resulting from a date with Buckpasser.

Lévesque’s quest for the Plate included a fourth by Royal Maple in 1963, a fifth by Pierlou in 1964 and a third by Rouletabille in 1968. Then began a string of second-place finishes – Fanfaron in 1969, Fanfreluche in 1970 and Barachois, a full brother to Fanfreluche, in 1972. Barachois’ miss may have been the most frustrating, because the colt was leading when he suffered a broken coffin bone in the stretch and was passed by Victoria Song.

In 1964, Lévesque paid $100,000 to Windfields for Arctic Dancer, a full sister to Northern Dancer. She ran twice. In her first start she ran beautifully for four furlongs. The problem was that the race’s distance was five furlongs. Next time out she showed the same early speed and then, coming around the final turn, ran extremely wide. She developed problems and never raced again. A mating with Buckpasser produced the swift filly La Prevoyante, which as a two-year-old had the kind of season few horses have ever had, winning all 12 of her starts in 1972, 10 of them stakes, and earning $417,109. She was an Eclipse Award winner as North America’s champion two-year-old filly and was runner-up for Horse of the Year honors to Secretariat. Naturally, she was Canada’s Horse of the Year. At ages three and four she was Canada’s champion filly and mare.

Lévesque was proud of this filly. After she had won the Matron Stakes at Belmont by 7 lengths, he insisted that a small group of Ontario racing reporters and commentators who had gone to Belmont for the race go with him for dinner. What he meant by going out for dinner included a flight in his private airplane to Moncton, N.B., to a friend’s house for an excellent lobster meal. The party arrived back in Toronto about 5 a.m. the day after the race.

L’Enjoleur won 15 of his 30 starts and in 1975 was voted Canada’s Horse of the Year for the second year in a row, the first repeater in the award’s 25-year history. It was the fourth time in six years a Lévesque horse had won the award, and all were from his own breeding. L’Alezane in 1977 joined Fanfreluche, La Prevoyante and L’Enjoleur with this honor. His stable won numerous Sovereign Awards and 82 stakes races at Woodbine. In 1982 Lévesque was awarded a Sovereign Award as Canada’s Man of the Year. He died in 1994 at the age of 83. He was an Honorary Trustee of the Ontario Jockey Club at the time of his death. 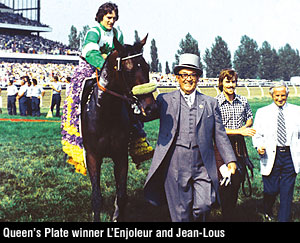