Lieutenant-Colonel Daniel A. MacKinnon had a love affair with harness racing. After all, he did spend 73 of his 87 years training and driving trotters and pacers. Yet despite his lengthy involvement in the sport, he was more than just a horseman. MacKinnon was born Nov. 12, 1876, in Highfield, P.E.I. Orphaned at 10, he left school and four years later bought his first horse. But horses, even then, were expensive to keep, and MacKinnon enrolled in a mail-order pharmacy course, becoming the first registered pharmacist in the province. When he wasn’t driving horses or studying pharmacy, MacKinnon had time to play five years of football. During that span, he also was Maritimes’ champion mile runner three successive years.

In 1901 he joined the 4th Regiment Canadian Artillery and was a member of that team when it won the Londonderry Cup in 1907. In 1912 he led the Canadian field artillery team to victory over the British side. When he wasn’t handling the big guns, MacKinnon turned to smaller weapons. An excellent marksman, he won the Dominion Rifle Association medal and the Governor-General’s medal. Even with all that shooting going on, MacKinnon still had time to rein his pacer Helen R. to 15 wins in 16 heats in a five- day period in 1912.

MacKinnon served during the First World War, winning the Distinguished Service Order for outstanding work at the Somme. At Passchendaele, he earned the Croix de Guerre, France’s highest military award. Originally commissioned a captain, MacKinnon retired from the army in 1932 with the rank of lieutenant-colonel.

Back in Canada after the war, he won driving championships at Halifax and Charlottetown in 1919. The next year, he expanded his business interests, purchasing the Charlottetown Guardian, the largest daily newspaper in the province. He had been writing a regular column about harness racing during his career called Down the Backstretch, and continued writing until he sold the paper in the late 1940s. MacKinnon had another passion during the 1920s and ‘30s – fox farming. He was one of the world’s foremost silver fox breeders and ran a school of fox farming in Charlottetown. But the colonel never forgot his horses. In 1923, he traveled to Mount Clemens, Mich., with his trotter Yank, where they set a world record for trotting on ice. Years later at Toronto’s Dufferin Park, he drove Present Medium to the Canadian record for ice trotting.

His interests in racing were not limited to training and driving. He owned the Charlottetown Driving Park from 1930 to 1947, and was president of the Provincial Exhibition Association. He founded Old Home Week racing, which now draws the largest crowds in the Maritimes for the sport. He also was a strong supporter of the U.S. Trotting Association, introducing that organization to the Maritimes and serving as its District 11 (Maritimes) director.

By 1959, at the age of 82, MacKinnon was still racing two horses with success in the Maritimes, the trotter Windy June and the pacer Stalag Hanover. His last year on the track was 1962 with the pacer Blue Skylark and in his last race was beaten by a nose.

During his career he owned and trained 78 horses. He disposed of his stock in 1962, and died two years later at the age of 87, after a short illness. 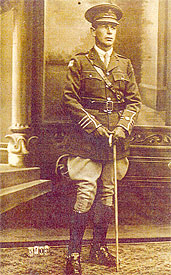