Maurice Michaud is generally given credit for bringing major league Standardbred racing to Montreal. The Quebec City architect and contractor loved harness racing and built a solid stable of trotters and pacers in the late 1940s and early 1950s. But he found himself frustrated by the limited racing opportunities in Eastern Canada and decided to do something about it.

In 1951 he became president of the Trois Rivieres track and a year later, with Donat Simard, leased Richelieu Park in the east end of Montreal, the idea being to bring big league racing to the city. At that time Richelieu was a small operation, racing one or two programs in a week. The few fans that made up the audience were usually presented with double dashes. Under Michaud’s far-sighted leadership and his general manager, Georges Giguere, the track began to flourish. The sport throughout Quebec began to grow. Among the major improvements he made was the introduction of totalisator machines, ending the former hand system of selling tickets, thus encouraging public confidence. He introduced what is called the California infield board and was also responsible for vast improvements in the backstretch, including adding several new barns and a paddock. He was the first man to promote night harness racing on a major scale. Michaud was a director of the CTA and served as vice-president from 1954 until his death in 1960. 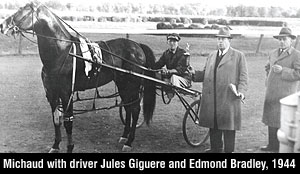