Commander John Kenneth Leveson Ross – Jack to his friends – was a tall vigorous man with a great splash of daring. It was said of him that he “always won without a boast and lost with a smile.” The U.S. press said he was “the best sportsman Canada has ever sent to this country.”

Born in Lindsay, Ont., in 1876, J.K.L. Ross was educated in Quebec at Bishop’s College School and McGill University. He inherited his wealth from his father, who was one of the founders of Canadian Pacific Railway. Ross married a Toronto girl then moved to Nova Scotia as a coal mining executive. In the Maritimes he developed a love for the sea that was to continue all his life. During World War I he donated three large yachts to the Royal Canadian Navy, two of which were converted into destroyers. He commanded one of them in the North Atlantic and was awarded the Order of the British Empire for distinguished naval service. Ross was involved in racing from 1915 to 1927, and developed a powerful stable that led all owners in North America in 1918 and 1919. His horses, Sir Barton and Billy Kelly, finished one-two in the 1919 Kentucky Derby. Sir Barton went on to win what is now called the Triple Crown. An outstanding feat at any time, but even greater considering the Derby and Preakness were only four days apart. The colt also won the Withers Stakes before his Belmont win. The four stakes wins were accomplished in a space of 32 days. 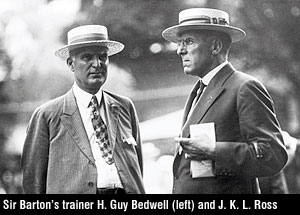 At university Ross excelled in hockey and was a member of the Canadian football champion- ship team. In Nova Scotia and Montreal he kept a string of riding horses. In 1915 he purchased 12 horses. St. Lazarian was the first horse to carry his black and orange silks that year. He won, as did Damrosch in the 1916 Preakness. That winter he purchased a 2,000-acre tract of land at Vercheres near Montreal as a base for his breeding and racing operations. In 1917 he hired H.G. Bedwell, one of America’s leading trainers. His stable dominated racing in the U.S. and Canada, and his influence brought many of the great names to Canada’s tracks. At Woodbine he won the Connaught Cup, Grey and Maple Leaf Stakes five times each. But he never won the King’s Plate; not through any lack of interest or of quality stock, but simply because the race was restricted to local owners of Ontario breds in those days. During the 1920s Ross was president of Blue Bonnets racetrack in Montreal.

While Ross dominated racing with Billy Kelly, Boniface, Constancy, Milkmaid, Cudgel and Hallucination, it was Sir Barton who gained him the greatest fame. Purchased in 1918 for $10,000, he was a maiden on Derby day, but would astonish the racing world with his Triple Crown feats of 1919. The following year the racing public clamored for a match race between Sir Barton and the sensational three-year-old Man o’ War. It took place at Windsor’s Kenilworth Park and Sir Barton, whose tender feet apparently bothered him on the hard surface, was no match for Man o’ War.

Hit by financial adversity in 1927 he disbanded his stable, selling his top horses at auction and his Agincourt Farms north of Toronto. A few years later he left Canada and retired to a life of sailing and fishing in Jamaica. He died in 1951, and by his wish was buried at sea. 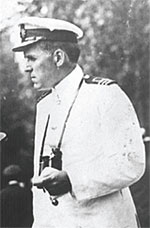