For many years William Earl Rowe was actively engaged in Ontario and federal politics, but he attracted much of his fame as a breeder, owner, trainer and driver of championship standardbreds.

His most noted horses were trotters, among them Van Riddell. Rowe drove his homebred colt in the 1946 Hambletonian, most famous of all trotting classics. He did not win the “Hambo”, but Van Riddell’s appearance at Goshen’s Historic track helped bring wide-spread attention to the sport of harness racing in Ontario. A year earlier, 1945, Van Riddell became the first of seven winners for the Rowelands Farm in the Canadian Standardbred Horse Society Trotting Futurity for two-year-olds, an event that Rowe won as owner/driver consecutively with Dorothy Riddell (1953), Flash Riddell (1954) and Bert Riddell (1955). Van Riddell’s great reputation as a champion trotter was followed by an outstanding career as a sire. Before his death in 1971 at the age of 28, Van Riddell produced winners of over $1 million. Celia’s Counsel was another great performer for the Rowelands Farm, winning the 1952 Maple Leaf Trotting Classic.

Rowe was born in Hull, Iowa, on May 13, 1894, and drove his first race in 1913. It was 57 years later that he finally hung up his famed blue and white silks, climaxing his driving career at age 76 with a fifth-place finish behind Demon Countess in the 1970 CSHS Futurity at Garden City Raceway. In between, the Rowe colors were visible at pari-mutuel and county fair tracks throughout Canada and much of the northeastern U.S.

Rowe and his son, Bill, were founders of two Ontario harness race tracks, Windsor Raceway and Barrie Raceway. The opening of the all-weather plant at Windsor in the fall of 1965 helped usher in a new era in the sport as major metropolitan centres across North America followed Windsor’s lead with year-round harness racing.

When he was not involved with his horse racing operation, politics occupied most of Rowe’s time. He was reeve of West Gwillimbury from 1919 to 1923. During a 45-year period he served as a Member of the Provincial Parliament, leader of the Provincial Conservative Party and a member of the House of Commons in Ottawa. From 1958 to 1962 he and his daughter, Jean Casselman Wadds, were the only father and daughter to ever sit together in Parliament. He was a federal cabinet minister, and later Ontario’s Lieutenant-Governor from 1963- 1968. On four occasions during this period he presented the Queen’s Plate to the winner of the historic thoroughbred race.

He also worked diligently on behalf of numerous horsemen’s associations, serving as president of the CSHS twice (1927-28 and 1958-61) and as an honorary director of the Ontario Harness Horsemen’s Association. But it was the breeding and training of horses that was uppermost with Rowe. It was a rare dawn indeed that did not find him tending to these chores on the 1,000 acre-farm near Bradford. He died in 1984 at his residence in Newton Robinson, Ont. 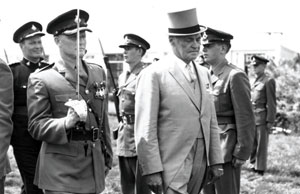