In the 1890s Joseph Emm Seagram revolutionized horse racing and breeding in Canada, winning a remarkable eight successive (1891 to 1898) Queen’s Plates, and fifteen before his death in 1919. Ironically, the first horse Seagram owned was a trotter, not a thoroughbred, a breed whose bloodlines and physical characteristics he would later relentlessly pursue.

Born near Galt, Ontario, (now Cambridge) in 1841, he entered the distillery business in the 1870s and in 1883 become proprietor of Joseph E. Seagram Distillers. As a business entrepreneur, racing administrator, community leader and politician, Seagram was a powerful Canadian, but his greatest influence, perhaps because it was his fondest love, was as a breeder and proprietor of thoroughbreds. 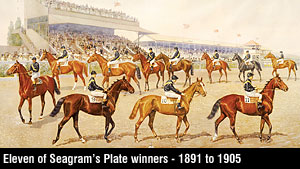 His life is a study of success, and his stranglehold on Canada’s most glamorous event was but one chord in his orchestration of achievements on the Canadian and North American turf. His steeds garnered every major prize offered in Canada. His stables regularly invaded the major courses of the U.S. with success. Each summer, when his familiar yellow and black silks showed up at Saratoga, N.Y., the entourage included nearly 50 horses, trainers, jockeys,grooms and exercise boys and two cooks for the stable’s personal kitchen.

Seagram was a firm believer in the English bloodlines and it was through the importation of mares carrying foals sired by English studs that he was able to create the dynasty on his breeding farm in Waterloo, Ont. He was president of The Ontario Jockey Club from 1906-1919 and a Member of Parliament from 1896-1908. Seagram’s most prominent Plate winner was Inferno in 1905, who was inducted in the Hall of Fame’s inaugural year – 1976. Terror was the sire of Seagram’s first Plate winner in 1891, Victorious, whose name was suggested to Seagram during the presentation ceremony by Lord Stanley of Preston, the Earl of Derby, and Canada’s Governor General. 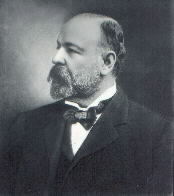