Herve Filion crowned an incredible driving career in majestic fashion on October 7th, 2012, at Rideau Carleton Raceway when he won three races in his final performance in the sulky. The Canadian legend, who hadn’t won a race in two years, concluded his remarkable career with 15,183 lifetime wins and over $88 million in purse money.

Filion’s world career record win total of 15,180 was surpassed this past summer by The Meadows driver Dave Palone at The Meadows Racetrack on July 5 when he surged past Filion’s mark that had stood for years. Filion was at The Meadows that night to witness the event.  Palone shook hands and hugged Filion, whom Palone grew up watching on television and idolized.

Filion said, “I am very happy for Dave. I’m happy for the industry of harness racing. It’s doing good…and I’m very happy that someone broke (the record), and it couldn’t happen to a nicer guy, Dave Palone.”

The 72-year-old native of Angers, QC, who then lived in New York with his family, won 16 seasonal dash titles, 30 times was in the top five and seven times the world’s leading money winner. He was known  for his unworldly gift in a race bike and his unmatched work ethic.  In 1968 Filion won a then-record 637 races, a mark that stood until 1986 when fellow Hall of Fame Quebec driver Mike LaChance bettered the mark. Two years later Filion regained his crown, winning 798 races in the first of three consecutive dash crowns.  A year later he surpassed his own record with 814 wins. (Three others have since broken that record.)

Prior to his memorable night at Rideau Carleton, Filion said he was pleased that his last hurrah would occur at the Ottawa Valley, where he started. “I won’t race anymore, I am retired. I’m 72, working on 73…I feel good, but you know, I’ve had enough racing horses. Right now, I’m spending a lot of time with the family.” 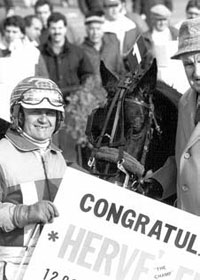 By the time Filion became the youngest driver ever inducted into Canada’s Horse Racing Hall of Fame in 1976 at age 36, the legendary horseman from Angers, QC, had already compiled nearly 6,000 wins.  More than 30 years later that number had ballooned to just over 15,000, making him the winningest driver in the history of North American racing – a total that was nearly 3,000 more than his closest competitor.

It’s been an impressive career for the determined man with nine siblings raised on the family farm in Quebec. “We were poor when I was a kid. Three boys to a bed and two horses to a stall.” As a boy Herve forsook hockey in favor of horses, constantly spending what time he could with them. “I guess I was about 11 when I started thinking about being a driver.” Herve was hoisted into a sulky race for the first time when he was 13 at Rigaud, Que. He won the race with Guy Grattan, which incidentally paid a handsome win mutuel. His determination to succeed soon had Herve studying the performances of other drivers. He chose future Hall of Fame inductee Keith Waples as one to pattern himself after. Waples’ unique style of being able to shift the bike around in tight quarters was a tactic that Filion adopted and refined to what many observers call the Herve Hop. “I can move a sulky maybe two feet to the right or to the left,” Filion said. Herve and his brothers (all of whom became licensed drivers) branched out from Angers to tracks in Quebec and Ontario before moving to the United States. 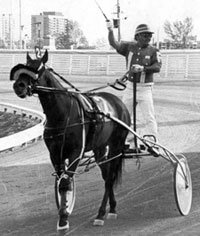 In his heyday, Filion often drove six or seven races at a matinee in New Jersey, then flew by helicopter to New York for six or seven drives at either Roosevelt or Yonkers. Many times after driving in an early race or two at the New York tracks he would sneak behind the tote board and hop a helicopter for a short ride to the airport, where he would board a private jet flight for a flight to Toronto and a drive in a stakes feature at Greenwood Raceway. The hustle paid off for Filion. He would make numerous appearances at small tracks instead of resting in comfort at home. One cold winter’s day at Orangeville Raceway he was thrown from the sulky as though shot from a cannon. He flew high and landed on his shoulder, but rolled to his feet, clear of oncoming horses. The incident didn’t faze him a she was back in the sulky for the next race. There were thoughts that an outstanding career might have ended that afternoon for a big-name driver on a track known to few people outside Ontario. He told one U.S. writer, “Look, I’m here because I owe the sport. It has been good to me. I should give something back.” Filion was fond of saying, “If I wasn’t doing this, I’d be carrying a lunch pail to work every day.”

Among the quantity of horses was a fair share of quality performers. He upset the great Albatross with Nansemond in The Little Brown Jug; he won the Dexter Cup with Marlu Pride and the Realization Pace with Adios Waverly, Keystone Pebble and Otaro Hanover. In 1986, Filion drove Quebec’s great trotting mare Grades Singing. In 1970 he gained more notoriety when he won five races on one card at Brandywine, Del., each in less than two minutes. At Windsor Raceway he also won seven races on a single program. That year, 1971, he was named the winner of the Lou Marsh trophy as Canada’s Professional Athlete of the Year. Filion also received the Medal of Honour from Prime Minister Pierre Trudeau; he won a Hickok Professional Athlete Award; he earned several United States Trotting Association awards; he was the Horseman of the Year, as voted by the Canadian Trotting Association and has been Harness Tracks of America Driver Of The year. In 1975, he became the youngest person ever inducted into the U.S. Harness Racing Hall of Fame. As U.S. Hall of Fame great Billy Haughton once said, “There are a lot of good harness drivers, a few great ones … and then there is Filion.”