“Every man who has acquired a bit of money should have a hobby and a worry – and he can have both if he owns a race horse,” Robert James Speers was fond of saying. Speers loved the racehorse, owning his first one at the age of nine, when his father was a blacksmith operating in the area where the Toronto International Airport now stands. He was one of the most revered and colorful entrepreneurs in Western Canada from 1915 until his death in 1955, building a racing empire that extended from Winnipeg to Calgary and over which he ruled like a benevolent dictator.

He went to Winnipeg at the age of 18 and five years later set out on a bicycle to seek his fortune at Battleford, 600 miles to the northwest. He soon abandoned the bicycle, giving it and some money for a horse and buckboard with which he concluded his trip. He opened a feed and grain business and borrowed enough money to build six small grain elevators in the vicinity of Wilkie, Sask., where he moved his family. He also ran unsuccessfully as a Conservative in a provincial election. Speers was the proprietor of Whittier Park and Polo Park in Winnipeg, Chinook Park in Calgary and operated annual one-week race meetings for the civic exhibition associations in Calgary, Edmonton, Saskatoon and Regina. He tried operating a track in Butte, Mont., but it failed at considerable financial loss.

“Writing a story about Jim Speers without mentioning his gambling proclivities would have been tantamount to attempting to cook an omelet without using eggs,” author Jim Coleman wrote in A Hoofprint On My Heart. Coleman told the story about when Speers lived in Battleford. At Christmas, Mrs. Speers went to Malton, Ont., to visit her family. Speers followed his wife five days later. When the holiday season was over Mrs. Speers said to her husband, “This has been a wonderful holiday. But, now, I can hardly wait to get back to our own little house in Battleford.” Speers answered, saying, “Well, we’ll leave for Battleford tomorrow, but we won’t be going back to the same little house – not immediately, anyhow. I lost the little house in a poker game the night before I left Battleford.” Speers seldom gambled at his own racetracks. He gambled on grain and livestock markets but most of all loved to play poker. Although Mrs. Speers deplored his gambling, she realized that it was his ability to gamble that had established his fortune. Speers established his own breeding farm in Manitoba as a way of providing horses to race at his tracks. He became Canada’s leading breeder, overtaking Colonel R.S. McLaughlin, chairman of General Motors of Canada.

“Speers is a marvel,” commented McLaughlin, “I’ve spent millions of dollars on my horse breeding activities. Speers operates his farm on a $50,000 bank overdraft.” Speers raced some of his own stock but most of the horses he bred were sold at auction. He also disposed of many of the horses on the cuff to trainers he knew he could trust, understanding that men who owed him money for horses were unlikely to ship the horses to another track, thus assuring horses for racing at his own tracks.

His generosity, although often costing him much money, also established good relations with horsemen. When the Butte track closed, he paid the shipping charges for about 250 horses to other tracks in the United States and Canada.

Speers walked with a limp, the result of an injury suffered in a train crash in Idaho when he was trapped several hours in the wreckage. He spent nine months in a Spokane, Wash., hospital. His lawsuit against the Spokane International railway was handled by R.B. Bennett, who obtained $13,000 for Speers in medical expenses and a cash settlement of $25,000. Bennett later went on to become Canada’s Prime Minister. So, you see, Speers never did anything in a small way.

His dream of becoming the first westerner to win the Plate was denied in 1948 when Lord Fairmond, who was ridden by legendary jockey Johnny Longden, finished second to Last Mark. The colt was the first outstanding western-bred to ship east for the King’s Plate. Speers died in 1955. 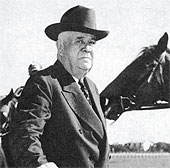