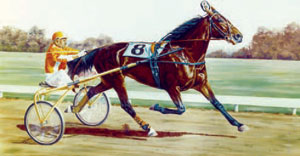 Those who studied Joe O’Brien during his prolific driving career always waited for the jiggling when he drove. The dapper veteran had a unique touch, urging on his trotters and pacers by jiggling the reins at the most critical moments during races. It was a move that experts learned to watch and was a move he used to success in 4,285 races since the United State Trotting Association started recording his feats in 1939. It was also a move that would one day earn him countless honors, inductions into numerous Halls of Fame in Canada and the United States, and the most recognizable one in the Standardbred industry, an O’Brien, which annually celebrates the top performers, horses and people, in Canada.

“Little Joe”, who was born in Alberton, P.E.I., on June 25, 1917, was regarded as one of the premier all-round horsemen in the sport with his legacy endowed by the O’Brien Awards. There are many unrecorded wins in O’Brien’s career, which started when he was a 13-year-old. At age 18 he left home to launch his career as a trainer. For eleven years he toiled in the Maritimes, where he quickly became a household name among horsemen and race fans, who called him “Little Joe” because of his age and physical stature. O’Brien graduated from high school in 1934 and served with the Canadian Infantry during World War II.

It was as natural for O’Brien to become involved in harness racing, as it was for fellow Maritimers to go fishing. Joe’s father, Harry, built many of the tracks on Prince Edward Island. O’Brien’s career skyrocketed when he moved to the U.S., establishing a stable at Foxboro, Mass., before linking up with the Saul Camp Stables. Many years later when O’Brien was invested with an honorary degree by the University of Prince Edward Island, he recalled his first major racing victory in California. “We were racing for a purse of $50,000 and at that time I thought it was all the money in the world.”

While he won over 4,000 races and his horses earned more than $20 million, it is not the cold statistics that cover his contribution to the development of harness racing. Along with achievements, he brought a touch of class and diplomacy. O’Brien wasn’t much for talking. One observer once wrote that if O’Brien said it was “wet” you’d know you were in a rainstorm. O’Brien let his actions do his talking in most cases. The USTA Guide Book needs three pages of compact type to cover his biography, race records and listing of classic races won. Some of his highlights include winning The Hambletonian with Scott Frost and Blaze Hanover, The Little Brown Jug with Shadow Wave and Melvins Woe, the Maple Leaf Trot with Flower Child and Ima Lulu, the Cane Pace with Nero and the Kentucky Futurity with Safe Mission, Governor Armbro, Arnie Almahurst and Armbro Flight, winner of the Roosevelt International Trot twice, and steering Steady Start to a world record 1:52 mile in a time trial. In his career he handled numerous Hall of Fame greats and champions-Fresh Yankee, Armbro Flight, Armbro Nesbit, Flower Child, Melvins Woe, Nero, Armbro Jet, Steady Star, Shadow Wave, Blaze Hanover, Armbro Ranger and Sunnie Tar. 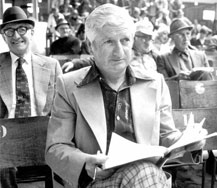 A keen eye for yearlings, O’Brien went to the 1963 Harrisburg sales and was told by his employer to buy only one horse. But before he could make any bids he was told the stable had been sold and he was out of a job. The horse O’Brien chose to bid on was Bret Hanover, who went on to earn $922,616. It was about the time that the O’Brien/Elgin Armstrong relationship took root. Armstrong learned that his trainer, Del Miller, was cutting back on his operation. And so Elgin hooked up with O’Brien, who developed Armbro Flight into one of the outstanding trotters of any era. She was one of his early projects with Armstrong. When they teamed up, O’Brien was established at Shafter, Calif., where he kept his home and winter training quarters.

Fresh Yankee was with O’Brien only four years, but “Little Joe” steered her to the bulk of her lifetime earnings of $1,294,252, a total that placed her behind only France’s Une de Mai as the leading money-winning trotter at that time. O’Brien and Fresh Yankee teamed to win the Roosevelt International in1970 for owner Duncan Mac-Donald of Sydney, N.S. In 1972, Fresh Yankee left the O’Brien barn after a disagreement between owner and trainer following the Roosevelt International. They patched up their differences and O’Brien went on to campaign MacDonald’s talented trotter Ima Lula, which was named Canada’s top two-year-old trotting filly of 1975. While most of O’Brien’s records have long since fallen, one of his last lasting triumphs was his world record on a five-eighths mile track with Dudey Patch over the old Dufferin track in Toronto in 1940. Dudey Patch was another of O’Brien’s Hall of Fame horses. The PEI government honours “Little Joe” with the Joe O’Brien Memorial Stakes for two and three-year-old pacing colts. Before he died in 1984 O’Brien had served as a director of the USTA and president of the California Breeder’s Association.