Austin C. Taylor assembled the most powerful stable ever seen in Western Canada during the 1930s. His white, green and red colors flew high along the coast from Vancouver’s Lansdowne Park to the Santa Anita track in California. With his operation centered at the ACT Stock Farm at Milner, the showplace of B.C. breeding farms, Taylor brought to the west big league runners like Dolan, who had been third in the Preakness Stakes at Pimlico, and won the Suburban Handicap in New York; African, Campanini and Wahomonie. A little later there were such stars as Special Agent and Whichcee, who finished second in the 1939 Santa Anita Handicap to Kayak II and third the following year to Seabiscuit and Kayak II.

Taylor bought Indian Broom from Brookmeade Stable in Kentucky as a two-year-old for $4,000 and bet at least that much on him as the second favorite in the 1936 Kentucky Derby. Indian Broom, forced to lose about five lengths on the first turn, had to settle for third behind Bold Venture and favored Brevity. Indian Broom had earlier set a world record for 1 1/8 miles (1:47-3/5ths) in the Marchbank Handicap at Tanforan.

When World War II broke out Taylor reduced his stock, which had numbered about 100 horses, to a mere handful. After the war he bought two or three yearlings a year and continued to breed on a modest scale. The best horses he owned after the war were Colonel Mack and Rolyat, both good stakes winners in California. The ACT Farm is the only stable to have won four B.C. Futurities, the first coming in 1931.

Even after his death at the age of 76 on November 1, 1965, horses produced by his breeding program made ACT the top breeder in the province. Taylor was a large, gruff man who shunned publicity but it was evident to those who knew him best that he was gruff merely as a cover for his many kindnesses. On his death the Vancouver Sun noted that Taylor “had a long, honored career as a mining magnate, financier, philanthropist and sportsman. He played a major part in B.C.’s growth and development.” During the war he loaned $1 million to Ottawa. “He gave them a million dollars and told them to give it back to him after the war,” related his son, Austin Jr.

Vancouver Province racing writer Alf Cottrell recalled “he was an experienced horseman, one of the few local owners who understood and loved horses. He rode in some steeplechases around Toronto, including Old Woodbine, and played a good game of polo.” Cottrell also noted “Surely no owner has ever given away so many useful horses as Mr. Taylor, nor helped so many breeders get started.” 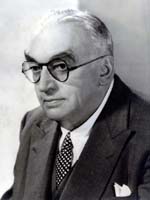