Though Roger White’s life ended just as he was achieving the pinnacles long predicted for him, he did have a racing legacy that perpetuated his name and memory for more than a year after his untimely death at the age of 40. White, a native of Quebec City, did his harness racing apprenticeship with Jules Giguere before moving to Montreal to establish himself as one of the “big name” drivers and trainers on the continent. The immediate legacy he left was future Hall of Fame inductee Silent Majority, who earned honors as Canada’s Horse of the Year in 1972 and became a sire of sires with his son Abercrombie and grandson Artsplace.

White was involved in harness racing since he was 18 and at the age of 33 in 1964 was named Horseman of the Year by the Canadian Trotting Association. He had become an outstanding performer on both sides of the Canadian-U.S. border. Fate, however, figured prominently in the final year of White’s life, one which finally saw him add a superstar to his stable. Widely respected as one of the best colt trainers in Canada, he had broken and trained many which were far better than average, but which weren’t quite big league. However, at the 1970 Tattersalls Sales in Lexington, Ky., White phoned Irving Liverman that he had “found an underdog” and was looking for a partner. The “plain looking colt” was Silent Majority. In 1971 White steered the colt to a win at Blue Bonnets and swept the three legs and final of the Canadian Juvenile Circuit stakes. It was obvious to White, and horsemen generally, that Silent Majority would be the “name” horse at age three. But White didn’t live to see it. Tragedy struck when the private aircraft White had chartered to get him from St. Catharines, Ont., to the Harrisburg sales crashed in the Pennsylvania countryside on Sept. 18, 1971. Silent Majority provided a magnificent postscript to White’s life. 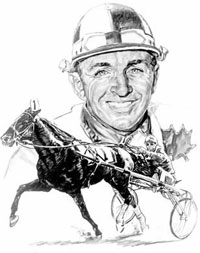 His way with young horses became legendary. Like most trainers, White was multi-dimensional. He had remarkable success in “breaking” youngsters. It was one of his specialties. He loved horses in the Dr. Doolittle sense, almost talking their language. Early in his career he operated a public stable. His chief patrons were Allan Leblanc, Edward Woloz and Montague Israel. Among the horses they owned were Timely Knight, who was named Canada’s Horse of the Year in 1964, and Sprite Kid. Sir Winston Pick and Ack Ack were among those he honed and built into sturdy campaigners. There was the devoted father, the man who tried to attend mass each morning, the miracle worker with young horses and the perfectionist in the barns. “He treated his barn like his home,” said Silent Majority’s co-owner, Liverman. “It became legendary that his barn was one of – if not the cleanest on the grounds. Before moving horses in, he scrubbed, fumigated and even laid carpeting. He felt horses deserved absolute cleanliness and any of his help who didn’t believe in that didn’t last long.” White represented Canada on the international scene and was leading driver on the Montreal circuit several times. He managed in an all too short lifetime to achieve respect and stature beyond his years.